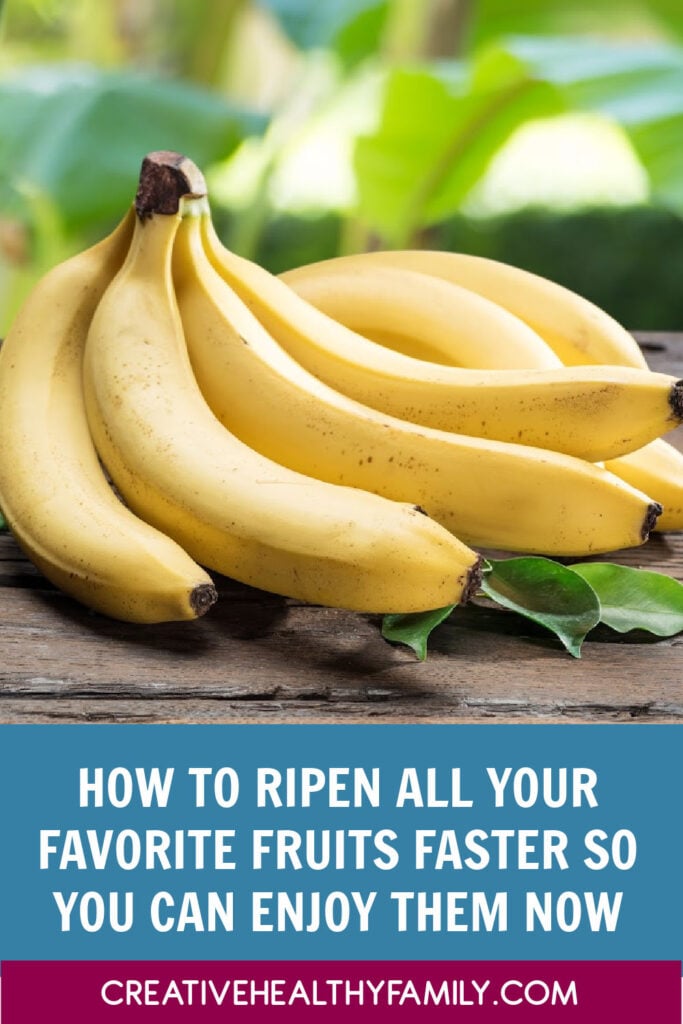 Want to know how to ripen that green banana faster? How about those freshly picked strawberries, pears, or mangoes? Keep reading to find out how to ripen fruits faster so you can enjoy them now! Plus, learn which fruits just plain won’t ripen anymore after picking, which fruits ripen in a paper bag, and more. 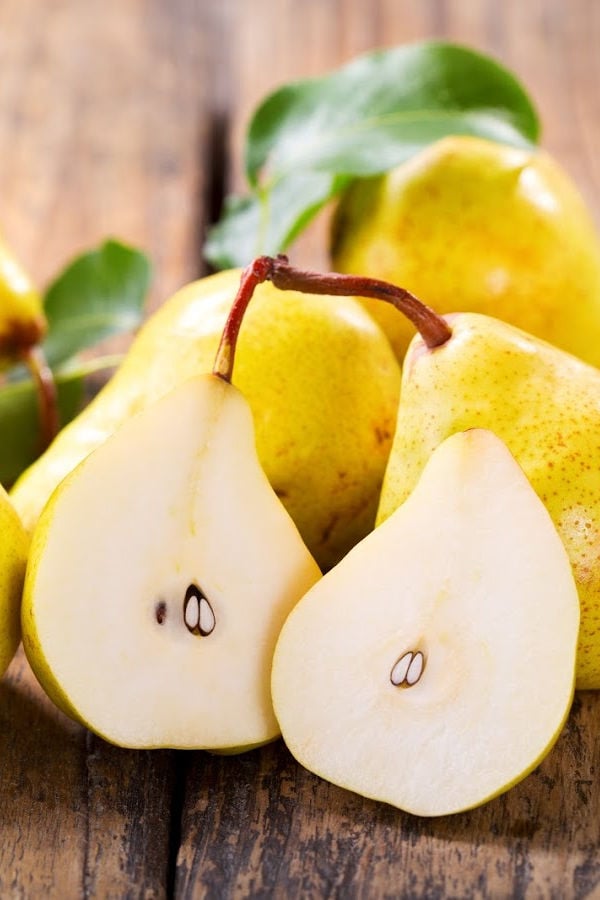 We’ve talked about how to ripen a rock-hard avocado fast, but what about other fruits? Last week, I had a major craving for bananas, so I added a bunch to my grocery delivery order for later that day. When they arrived, I was all ready to peel back that perfect yellow skin and chomp into that “not too hard, not too soft, but just right” banana goodness.

Alas, all I found were a bunch of green (and I’m talking “just picked from the tree” dark green) fruits that were still an eternity away from perfection. Thankfully, I have a few tricks up my sleeve for times like this! Let’s start with how I ripened that banana fast, then check out my tricks for other fruits.

How to Ripen a Banana Fast

There are two tricks for ripening bananas fast. The first takes a bit longer but produces better results, while the second works quickly but doesn’t taste as good.

For best results, put your green bananas in a plain brown paper bag (like the kind used to pack a bagged lunch). If you have any handy, toss in an apple with it, and fold over the top a few times. The closed bag helps speed up the release of ethylene, the chemical reaction that causes picked fruits to ripen faster.

Nine times out of ten, my bananas are perfect by the next day. However, if the skins are SUPER green, it may take two. Still, it’s a lot faster than waiting for them to ripen on their own. If you want a banana right now and can’t wait a day longer, then you can use a similar oven-ripening trick that we use with avocados. Keep in mind, though, that like avos, it doesn’t have the same flavor as a naturally ripened banana.

Just pop them- still in their skins- into an oven heated to 250 degrees for about 15 minutes. They’ll come out a bit softer and sweeter. This method is best for when you want to use them as an add-in and not on their own or when they’re the star of a recipe. In other words, they won’t work well for banana sushi but they’ll be good enough to add to your cereal. 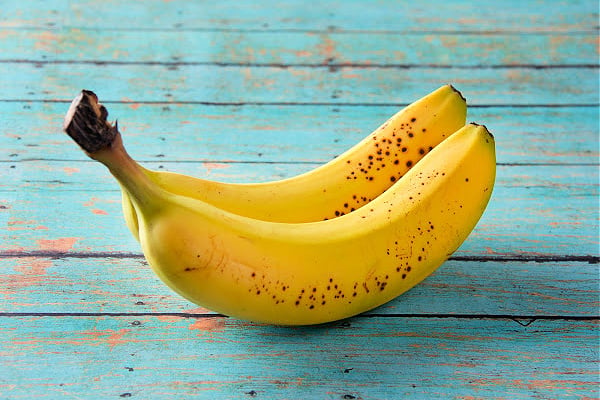 Here’s the bad news: strawberries don’t really ripen after they’ve been picked. However, unlike other fruits that we’ll discuss later, you can make those hard, sourish berries taste better.

While everyone knows that you can ripen strawberries fast by putting sugar on them, that’s not exactly healthy, now is it? It kind of defeats the purpose of eating fruit to satisfy a sweet-tooth craving. The healthier method takes longer- up to a few days- but it’s still faster than just sticking that carton in the fridge and hoping they soften up (and sweeten up) at some point.

I learned this strawberry hack from Consumer Queen. She recommends laying the berries out on a cookie sheet- tops and all-so that they aren’t touching. Then set them on the back of your counter where they won’t be moved. Another friend puts them in her oven (not turned on) since she has a dog that she calls a “counter shark” who will definitely try to “disturb” them. Again, this trick won’t produce riper strawberries, per se, but it will make them more enjoyable. Just don’t let them go too long or they’ll rot and turn to mush. 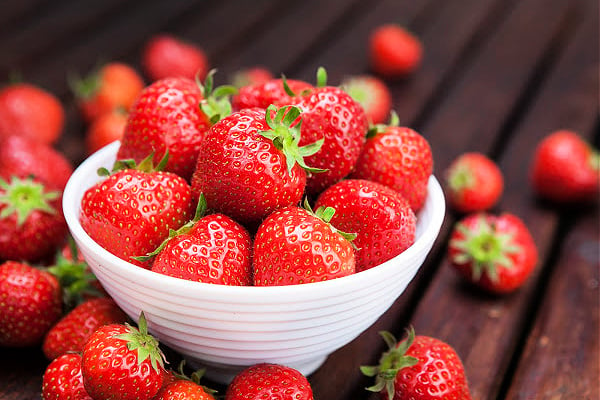 How to Ripen a Pear Quickly

Pears are actually one of the few fruits that taste better when they’re allowed to ripen off the tree versus on. So, the majority of them are picked well before they’re ready to eat. That means you could easily end up with a very hard and bitter piece of fruit.

Ripening pears quickly is actually fairly easy, though. In fact, there are a few tricks that you can try. The first one requires a banana. Just pop your pear in a bag with your ripe banana, close the bag, and wait a day or two. This trick works for the same reason putting bananas in a paper bag does- it releases ethylene faster.

If you’ve picked your own pears, you can also try the chilling method (growers already do this, so it’s pointless if you’ve bought them). According to SF Gate, chilling them at 30 degrees for 2-3 days improves the overall ripening speed. However, that really only works for Bartlett pears. Other types, like Bosc, take 2-6 weeks! That’s why farmers do it before sending their pears off to the market (no one wants to wait over a month to eat pears that they bought, after all).

Unlike pears, mangoes do not ripen well when chilled. So, if you’re tossing them in your refrigerator as soon as you get home from the grocery store, stop. Instead, Mango.org recommends leaving them out at room temperature on your counter. Once they’re ripe enough for you, then you can cut them and store them in the fridge to slow down the rest of the ripening process.

It will take a couple of days for your mangoes to reach perfection. However, like bananas and pears, putting them in a paper bag at room temperature also speeds up the process quite a bit. Once they’re ripe, use them to make refreshing mango ice cream (no ice-cream maker needed).

Other fruits that ripen faster using the paper bag method

As you can see above, the paper bag method is the most common way to ripen fruits faster. Aside from pears, mangoes, and bananas, it also works on:

You can even mix different fruits into the bag. For the best (and fastest) results, toss one piece of ripe fruit in with the batch. 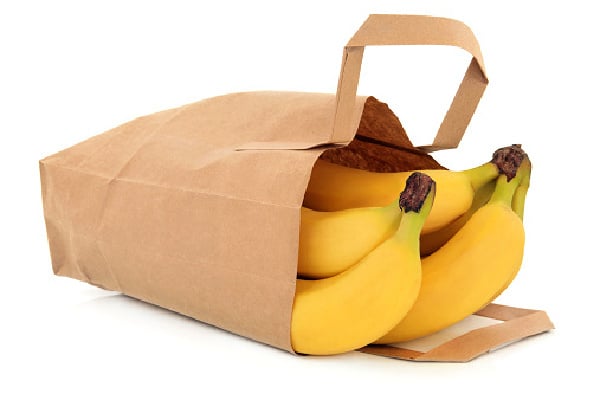 Can you ripen watermelons after they’ve been picked?

Bad news: watermelons are one of the fruits that simply will not ripen any more than they already are once picked. The good news, though, is that expert growers know how to pick watermelons when they’re at peak ripeness.

Plus, there are so many tricks for how to pick a watermelon at the grocery store to make sure you’re getting a good one. So, you’re less likely to get stuck with an unripe watermelon than a lot of other fruits. If you do cut into the fruit only to find that it’s not quite as sweet and juicy as you’d hoped, you can always use it in a watermelon smoothie!

Other fruits that don’t ripen at all after picking

Unfortunately, the list of fruits that don’t continue to ripen at all after picking is fairly long. According to Culinary Lore, they include:

If you buy any of these fruits only to discover that they’re not ripe enough, don’t worry; they’re not a total waste. Like watermelons, you can use them to supercharge your smoothies by combining them with other ripe fruits!

Long story short, while letting fruits naturally ripen on their own is the best way to go, when you’re in a hurry it’s nice to know that you can help speed up nature a bit (or even a lot). Just remember that while the brown paper bag trick won’t affect the fruit’s overall taste, other methods- like using an oven- will.

So you have to decide for yourself just how much natural flavor you’re willing to sacrifice. If you’re planning to use the fruit to complement other flavors, use fast ripening methods won’t ruin the final results. However, when the fruit is the star of the show, it’s best to let nature take its course.