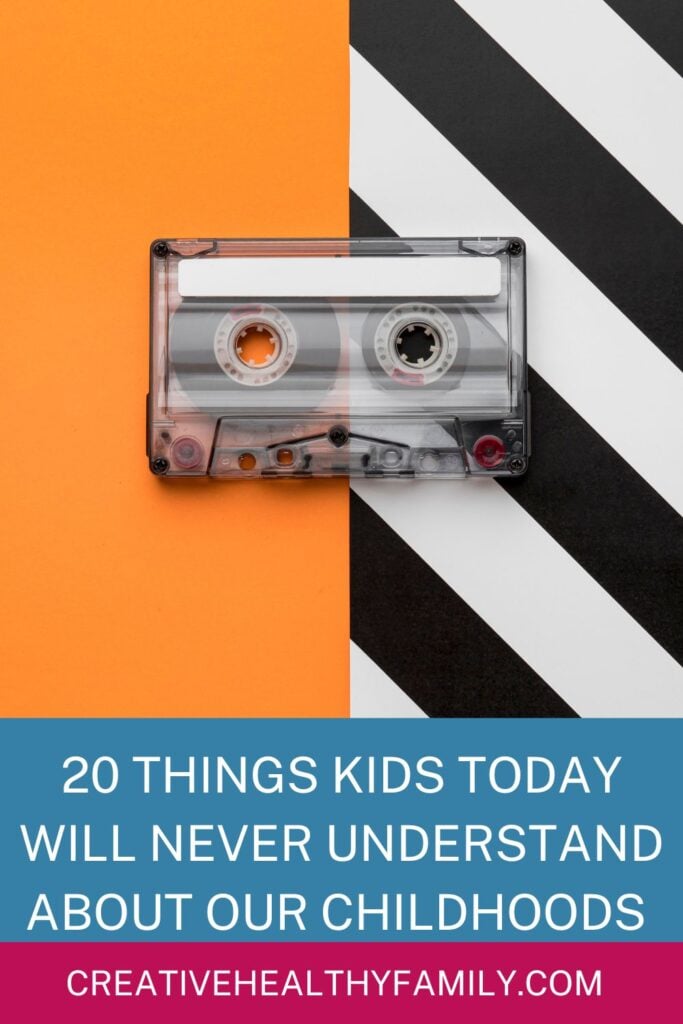 From corded phones to floppy disks to Saturday morning cartoons, there are just some things kids today will never understand. Read on for the top 20 things about our childhoods that absolutely baffle our 21st-century kids! 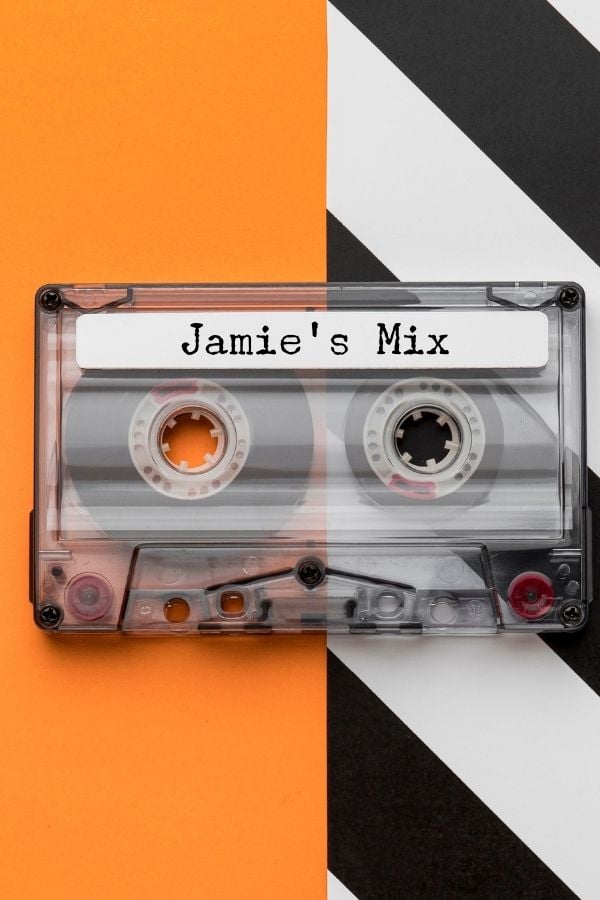 Things Kids Today Will Never Understand About How We Grew Up

No matter how many 80s toys and fashions make a comeback, there are just some things from the decade that our kids today will never fully comprehend. Here are my top 20, in no particular order!

1. Trying to decide which Saturday morning cartoons to watch

First, you have to get your kids to comprehend the fact that we didn’t have 24/7 access to every single cartoon in existence. Next, you have to explain that we also didn’t have the technology to record multiple channels at once (and some of us didn’t even have the ability to record ONE channel!). Only once they grasp these things can they fully understand what it was like to agonize over whether to watch Scooby-Doo or Bugs Bunny that week. 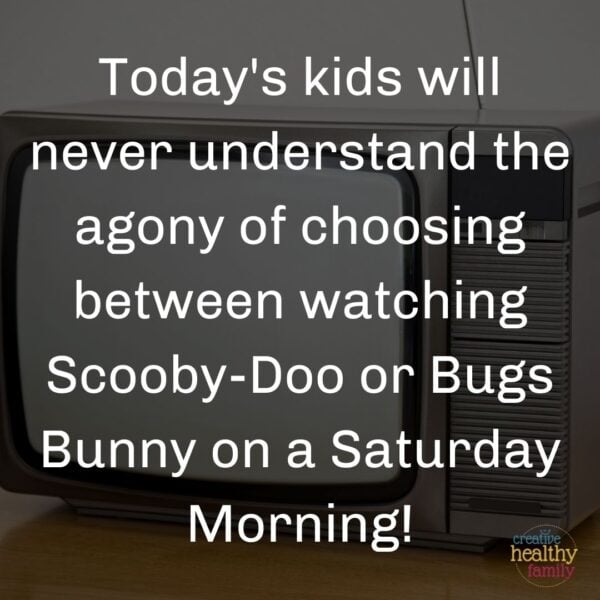 2. Finishing off our weekend with The Wonderful World of Disney

Sunday night was depressing because it meant an end to our carefree weekend. The Wonderful World of Disney took the sting out of it a bit, though! Well, at least it usually did. My friend’s brother is still traumatized by the death of Buddy (the very first service dog ever)  in Love Leads the Way.

3. Spending hours at the library because you couldn’t check out the books you needed to write your term paper

Not only did we have to go to the library to get research material, but half of the books we needed were in the “reference-only” section! So, we had two choices: bring a roll of dimes and hope that the photocopier was working or sit there all day taking notes by hand. Oh, and if it was a really thick book the photocopier cut off half of the text, so we still had to take notes either way.

6. We rarely had a way to let someone know we were running late

My friend brought this up when we were talking about things kids today will never understand. A few weeks ago, her teen son was going to be a little later getting home than he said he would because of traffic. He sent her a quick text so she wouldn’t worry. It made her think of all of the times she was late getting home and had NO way to let her mom know because there was no payphone nearby.

7.  Flipping through the phone book to find a number

This is the last one about phones, I promise. Kids today can look up any store and instantly see the number right in the Google search results. They’ll never know what it’s like to rely on a phonebook. Heck, sometimes we just flipped through the Yellow Pages to find something to do on a boring Saturday!

8. Relying on paper maps and wrong directions to get anywhere unfamiliar

If you wanted to know how to get from point A to point B, you either had to unfold an unwieldy map or ask someone. Nine times out of ten, they gave directions that involved turning right at the oak tree or counting traffic lights and hoping they didn’t forget one!

9. Fighting over who got to sit in the “way back”

Our kids (thankfully) don’t know what it’s like to ride in a car without wearing a seatbelt, so I highly doubt they can fathom the idea of fighting over who got to ride in the “way back” of the family station wagon. 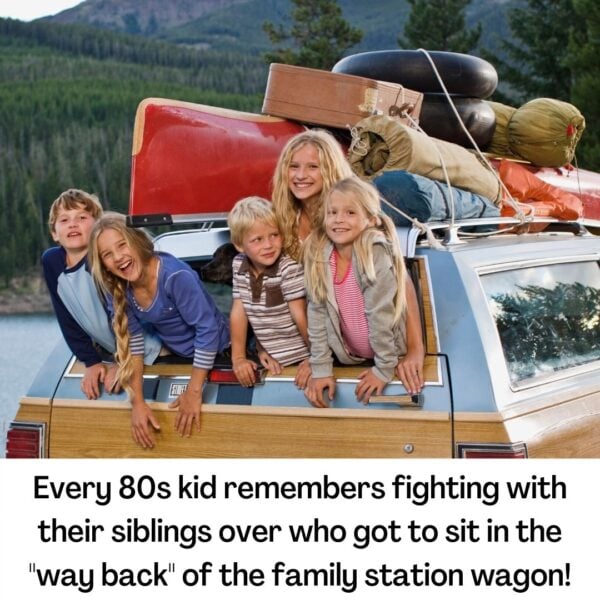 10. Driving to every video store within a 50-mile radius to find a copy of the movie you really wanted to watch

From a friend: “I remember when E.T. first came out on video. We had a Betamax at the time. My mom called every single video store in the phonebook to find us a copy. We finally found one in a small town 30 miles away.”

11. Being traumatized by “very special” episodes

Sure, “very special episodes” served their purpose and helped teach us about serious topics. But let’s be honest, they were also a bit traumatizing! Especially since we thought we were just going to spend 22 minutes laughing at Punky’s antics…not desperately hoping that someone finds Cherie before that old fridge that she locked herself in runs out of oxygen! Even the stars of the show are still traumatized!

Today’s kids think they’re so sly because they’ve figured out how to text their friends without taking their phones out of their pockets. Okay, admittedly that’s a pretty cool skill. But it’s nothing compared to trying to launch a fancily folded note to your bestie across the room under the watchful eyes of Mrs. Cratchit! 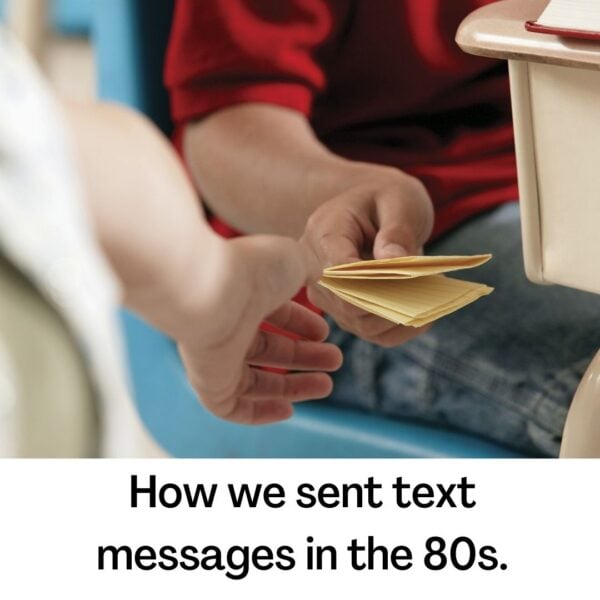 13. Never having to worry about your worst and most embarrassing moments going viral

If there’s one thing from my childhood that I wish our kids got to experience, it’s this one. We never had to worry about someone with a cellphone capturing our every embarrassing moment or stupid mistake. We certainly didn’t have to worry about those mistakes being broadcast all over social media and YouTube so that strangers could make fun of us for it. 🙁

14. How a pocket full of quarters provided hours of entertainment

Our kids will never know the joy of finding loose change in the couch and spending all day spending it at the arcade.  Sure, arcade games still exist, but have you looked at how much they cost these days? We’re talking $1-2 or more just for ONE game!

15. The joy of seeing your teachers roll in a VHS cart…

When our teacher rolled in that VHS cart, we knew we were either having a “fun movie day” or at least getting a good 45-minute nap!

16. …and the terror of seeing them roll in overhead projectors

Overhead projectors, on the other hand, invoked a sense of dread. Those meant trying to stay awake in the dark to take notes (because if Mrs. Cratchit went through the trouble of making slides, you just knew that it was going to be on the test.

Has anyone ever actually made it to Oregon???

18. The joy of an unstructured summer full of independence

Another one that makes me sad, too many kids today don’t really have the opportunity to actually BE kids the way we did. Take summer, for example. Ours were filled with totally unstructured free play time. We were out the door after breakfast and didn’t come home at least until the street lights went on. 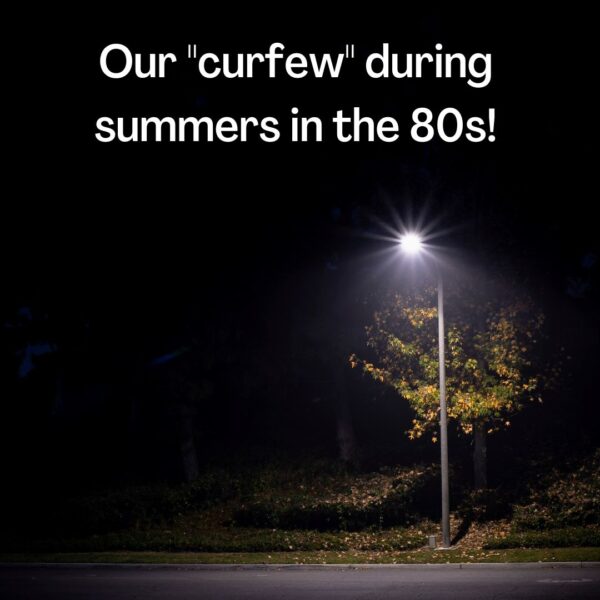 I didn’t have MTV when it first came out (in fact, I don’t think I got it until many years later), but a friend did. Back then, it was literally music television.

20. The awe that every new technological advance inspired within us

Honestly, these days I’m so used to new tech coming out literally every other day that I don’t really feel that sense of awe and excitement anymore. Plus, our kids know that the hot new gadget that they want will be obsolete by the time they can afford it. What’s the point in getting excited about new tech when it will be old tech tomorrow?

Before we say goodbye for today, I just want to make something clear. This isn’t a rant about or criticism of “kids these days.” Every generation has something that baffles them about the previous one.  I mean, very few of us know what it was like to watch a man walk on the moon for the first time, right? Our parents probably didn’t understand how their parents felt the first time they saw a full-color picture. Our grandparents were baffled by how people got around before cars. Our great-grandparents…well, you get the point.

I’m curious to see what my children will write one day when they’re talking about “things kids today will never understand,” aren’t you? I’m hoping that they’ll be things like “kids these days will never understand what it’s like to live through a pandemic,” or “kids today will never know how it feels to go hungry because your parents had to choose between food and rent.” Now those are some advances that I’d REALLY like to see happen. How about you?