Should you come clean about Santa and Elf on the Shelf to your kids this holiday season? Once our kids reach a certain age, we start asking ourselves if this is the year we should totally shatter all of their illusions about Jolly Old Saint Nick and his band of happy little elves who sit on shelves.  Rather than asking yourself if you should just come clean and tell them the truth, maybe you need to ask yourself if there’s any real harm in letting them believe a little longer. 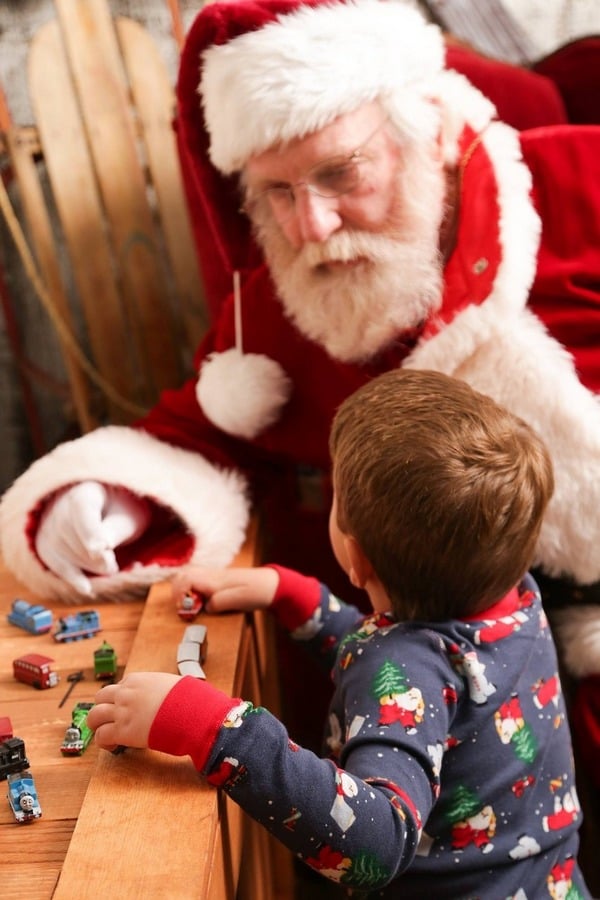 Should You Come Clean About Santa and Elf on the Shelf?

First, since you’re here reading about coming clean about Santa and his pal, the Elf on the Shelf, then I’m going to assume you’re okay with your kids believing in them in the first place. If you’re philosophically opposed to the entire concept of Santa or any other mythological holiday beings, then this probably isn’t the right post for you. Instead, I recommend checking out my favorite meaningful gift ideas and experiences. I think you’ll enjoy that one more.  Now, let’s talk Santa!

Do a quick search for “should I tell my kids the truth about Santa” and you’ll find answers running the gamut from “Wait, Santa isn’t real???” to “How dare you lie to your kids in the first place?” Parents have a lot of different opinions on the topic that are greatly influenced by their own parenting philosophy. While everyone is absolutely entitled to their own opinion,  I wanted to know if there’s any harm in letting them believe. As in real, psychological harm. For that, I turned to actual professionals. Most of them focus specifically on Santa, but it can easily apply to Elf on the Shelf, too. After all, they’re an important magical part of many family’s holidays, too! 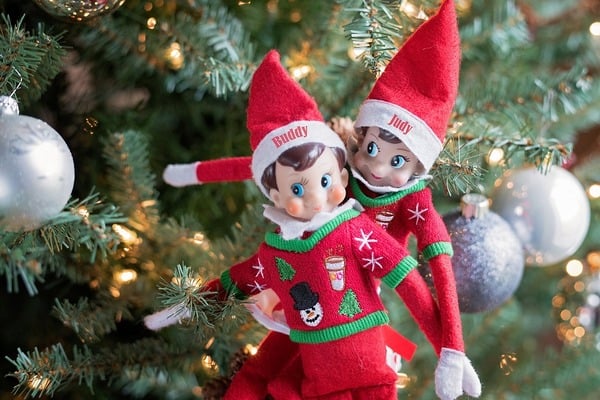 Is it psychologically harmful to let kids believe in Santa and Elf on the Shelf?

Really, the answer to that question depends entirely on who you ask. See, just like there are different parenting philosophies, there are also different psychological philosophies. Psychology is far from an exact science. Some academics will tell you that letting kids believe in Santa at all is wrong because it’s a lie. Period. End of discussion in their eyes.

Vanessa LoBue Ph.D. (aka The Baby Scientist), however,  explains on Psychology Today that, “fantasy in general is a normal and healthy part of child development.” She goes onto explain that “magical thinking” isn’t just an important part of childhood, it’s an important part of adulthood as well. She likens it to the chill we get when we pass a supposedly “haunted” house, or the way we talk to our loved ones that have passed on.

However, as kids get older, LoBue explains, they start to lose a bit of that magical thinking and begin relying on hard evidence. Even more important, they learn to seek out new evidence. Basically, at some point, just eating the cookies that your kids leave out and signing a few gifts “Love, Santa,” isn’t going to be enough. At that point, your kids will naturally find out on their own that Santa isn’t real…at least in the form of the guy who brings presents down the chimney.

Believing in Santa and other holiday myths is perfectly healthy

Of course, it’s not enough to just take the word of the first psychologist who agrees with my overall philosophy. That would be cheating! So, I kept looking for other professionals who could back her up. I found a terrific interview with child psychiatrist Dr. Matthew Lorber about when to come clean about Santa.

As Dr. Lorber explains, “Imagination is a normal part of development and helps develop creative minds.” He goes on to say that the Santa myth is grounded in reality, so it’s not a blatant lie. Saint Nicholas was a real man known for giving gifts to the poor. “It’s a real story, it’s a real value and it’s something that inspires children.” While Lorber says that he doesn’t necessarily think it’s an inherently “good” idea to let kids believe, he also says that it’s not harmful. He goes to on explain that “Questioning what’s real and what’s not is a normal part of mental development.” 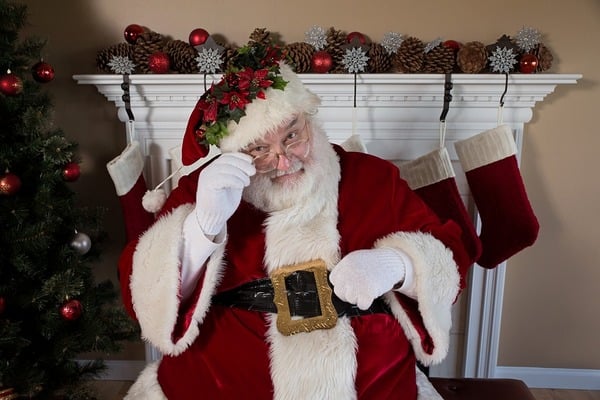 We should let our kids’ belief in Santa develop naturally

Now that we’ve heard from a couple of reliable sources about whether or not letting our kids believe in Santa is psychologically damaging, let’s delve into the original question, “Should you come clean about Santa and Elf on the Shelf?” According to Jared Durtschi of the Kansas State University’s marriage and family therapy program, no.

“I don’t think it’s necessary for parents to decide upon a time to tell their children there is no Santa,” Durtschi explains. “As children develop, the magical thinking that is so common in kids, which allows them to so readily accept all the details of Santa Claus, will give way and they will soon figure it out on their own.”

During that time, Durtschi says, kids will fluctuate back and forth between believing and not believing, so just because your child expresses doubts doesn’t mean they’re ready for you to confirm them. He recommends asking neutral questions like, “What are your thoughts on Santa?” rather than, “Do you still believe in Santa?” 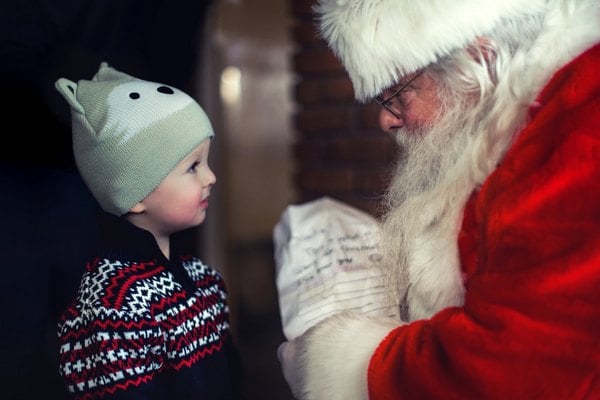 Let kids be kids for as long as possible

Here’s my take on when to come clean about Santa and Elf on the Shelf: just let kids be kids! They will outgrow magical thinking on their own, why rush it? Many of us believed in Santa as children and no psychological harm came to us because of it. For most of us, discovering the truth didn’t destroy our faith and trust in our parents.

When they do come to you and tell you that they without a doubt no longer believe in Santa and Elf on the Shelf isn’t real, then you can come clean. Explain to them that while they may not be “real” in the sense they once believed; their overall message is still important. Do good, be good, believe in the goodness of others. In my opinion, anything that helps teach our kids those vital life lessons can’t be a bad thing. 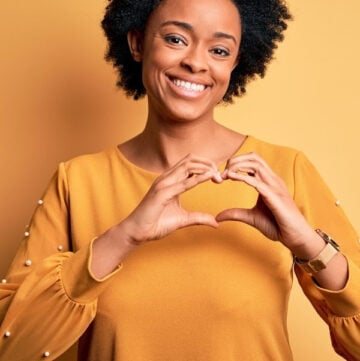 I want to make something abundantly clear, because I have a feeling at least one person out there ...

END_OF_DOCUMENT_TOKEN_TO_BE_REPLACED 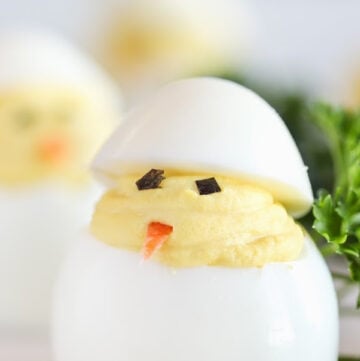 Hard Boiled Egg Chicks are super creative and healthy. Get your kids involved in the process and ...

END_OF_DOCUMENT_TOKEN_TO_BE_REPLACED 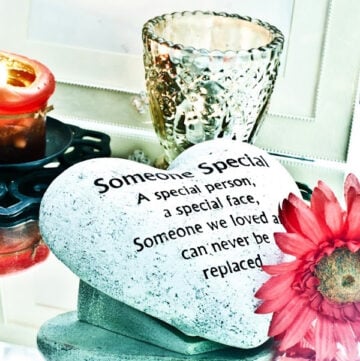 Nothing- not even time- can completely remove grief. However, taking time to honor loved ones who ...

END_OF_DOCUMENT_TOKEN_TO_BE_REPLACED 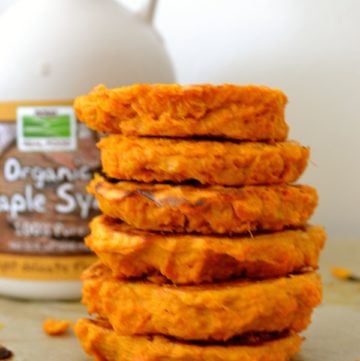 My whole family enjoys these 2 ingredient sweet potato pancakes! It's one of my favorite healthy ...