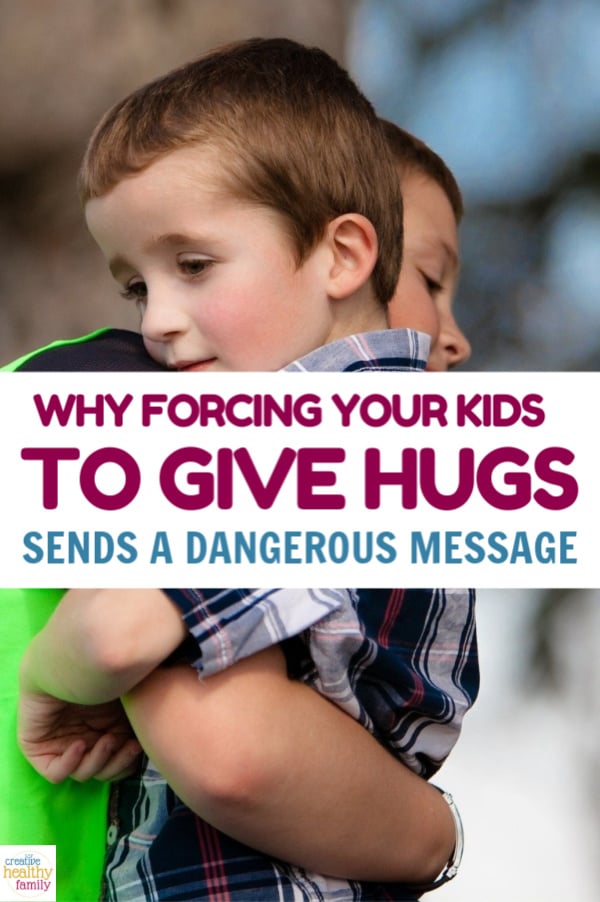 If you make your children dole out affection to every aunt, uncle, cousin, or grandparent at family functions, you may want to sit down. We’re going to talk about how forcing kids to give hugs against their will sends a very dangerous message. It’s an uncomfortable topic, I know, but it’s one that really needs to be discussed. Read on to learn why it’s such a bad idea and what your kids can do instead of giving out unwanted embraces. 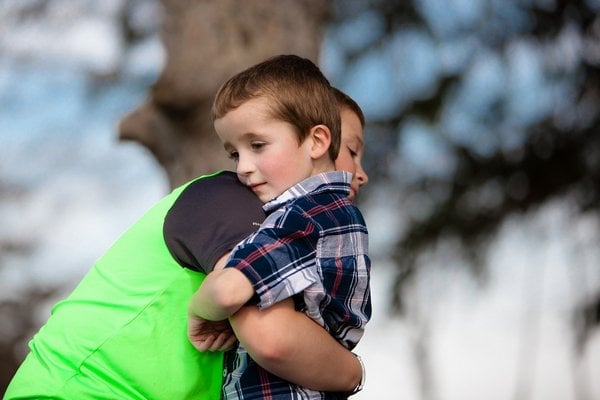 Most of us were raised to embrace and kiss people we barely knew at every holiday gathering, reunion, and family dinner.  Sure, we didn’t want to hug great Aunt Petunia, who always smelled like pickles.

We certainly weren’t keen on hugging Random Roger, that friend of our grandparents who appeared like magic at every function, only to vanish back into the woodwork once dessert was served. We barely knew these people, yet they were “family,” so like it or not, they got hugs.

So, why should things be any different with our own children?

Why shouldn’t they have to hug Random Roger and Petunia Pickles like we did? Well, like I said when we talked about banning homework, we know better so we should do better. It’s really that simple. Every generation learns a little bit more than the last, and we adjust.

It doesn’t mean that our parents were monsters for making us hug our relatives when we didn’t want to. They didn’t know what we know today. Just like we don’t know what our kids will learn tomorrow when they’re raising our grandchildren.

To understand why forcing kids to give hugs against their will sends a very dangerous message, we have to talk about another lesson that we constantly try to instill in our children- the concept of consent.

From the moment our kids can understand us, we start teaching them about consent and body autonomy. We tell them that their bodies are their own. We explain that no one should touch them against their will, especially in certain places or ways that make them uncomfortable.  Then, we force them to hug Aunt Petunia and Random Roger.

Yes, we know these people. We feel safe with them. We feel like our kids are safe with them. So, we never think that something so simple, something that we did a million times as children, could undo so much hard work or send such a dangerous message. Put simply, we don’t think like kids, who are far more capable of seeing hypocrisy than we are as adults. 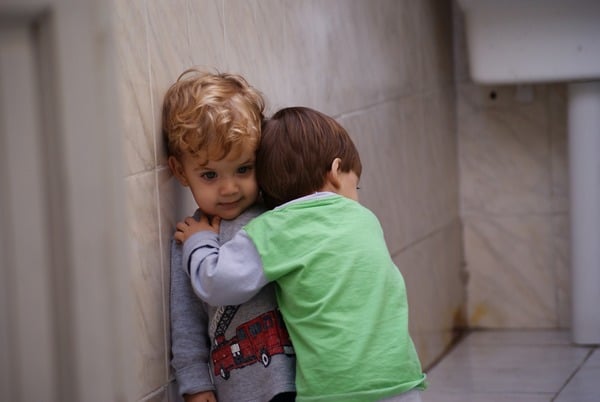 You see it as a familial obligation, but kids see it as something else

You see those forced hugs as part of life, as being polite, as just a moment of mild discomfort that’s over before it really even begins. Your child sees it for what it is- an oxymoron, a contradiction in term. To them, you’re saying, “Yes, you have autonomy over your body…unless we are at a family function, in which case, your body is free game.”

Here’s where it’s going to get really uncomfortable.  According to Darkness to Light, 60% of children who are abused are done so by someone the family trusts. About half of those trusted people are family members.

I don’t think I need to spell out why forcing kids to hug family members against their will sends a dangerous message, but just in case, I will. You are telling your child that they do not have autonomy over their body when a family member is involved.

In other words, if the worst happens and Roger or Petunia turns out to be a predator, young kids won’t try to stop them because they’ve already been taught that their bodies aren’t their own when it comes to family members.

As Karen Days, President of the Center for Family Safety and Healing at Nationwide Children’s Hospital, tells TODAY, “Forcing children to endure affection teaches them a dangerous lesson that people they know can always touch them.” It is unreasonable to expect a preschooler to understand the difference between a forced hug and other forced touching. As parents, it’s our job to stand up for them. 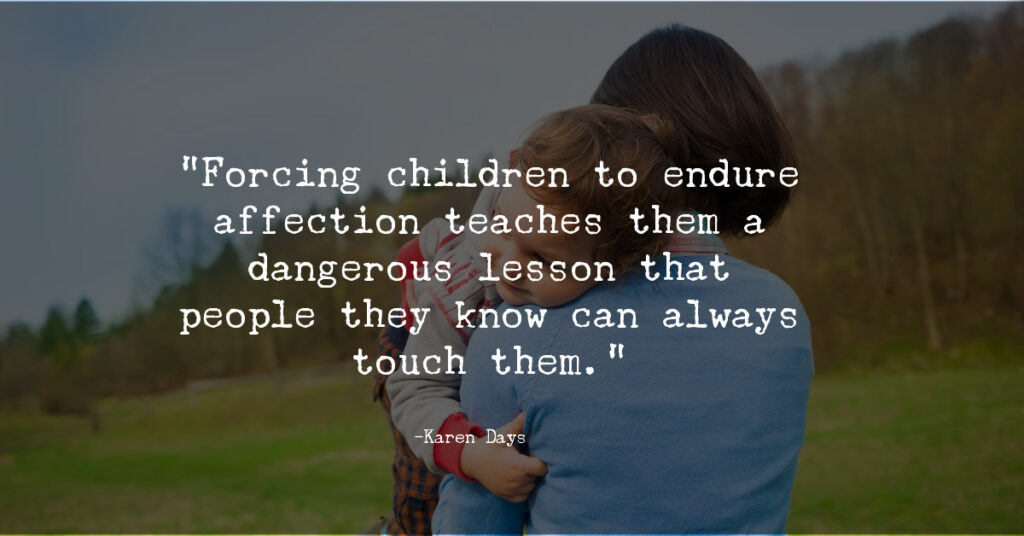 How to navigate family functions while respecting your child

If your child rejects Aunt Petunia’s open arms, just say, “We’re teaching her that she has a right to decide what happens to her own body, and that goes for hugs, too. Give her time to get to know you.” It’s that simple.

If anyone objects, let them object. Should they roll their eyes or tell you that you’re coddling her, ignore it. If they call you “too soft,” respond with a “thanks!” After all, it’s a good thing to be a kind, gentle, and “soft” parent! A moment of mild confrontation with a family member is worth avoiding sending the wrong message to our kids, isn’t it?

If you’re really worried about offending anyone, Michigan State University has some fantastic tips to avoid the discomfort. A few examples that are so much better than just forcing kids to give hugs: 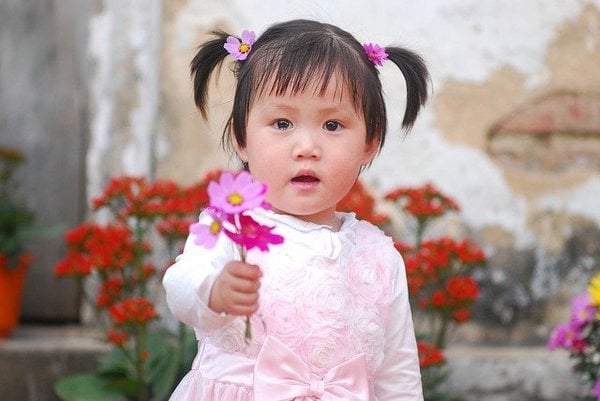 Brenda in the comment section brought up a very good point that I think deserves to be mentioned here. You can see it below this post, but here’s a recap: her friend’s daughter said “no” to a hug and the man started pouting, which prompted her friend to tell the child that she was making the man sad.

Brenda writes, “I privately went to my friend later and shared with her pretty much what you’ve written here except adding that teaching a child they are responsible for an adult’s feelings is even worse than the just the touching part.”

I agree with Brenda on so many levels here. First, it’s never okay to make a child feel like they’re to blame for a grownup’s sadness or anger. Again, what message does this send? You can say no, but if an adult pouts, you have to say yes? We’re right back to square one, then, with a child feeling like they can’t actually control who touches their own body.

Second, this sends a message that goes way beyond body autonomy. A child who hears “you made so and so sad” may go on to think that every time someone cries around her, it’s her fault. Maybe it’s her fault, too, if they’re mad. Perhaps it’s even her fault if mommy and daddy fight.

I know what some of you may be thinking, “That’s a bit of a stretch, don’t be so dramatic!” Sure, to us “rational” adults, it’s a stretch to think that saying “You made Random Roger sad today” translates to “Everyone’s sadness in the whole wide world is all your fault.” You have to remember, though, that kids think about things in such a significantly different way than we do. It’s called “magical thinking,” and it’s a major part of child developmental psychology. 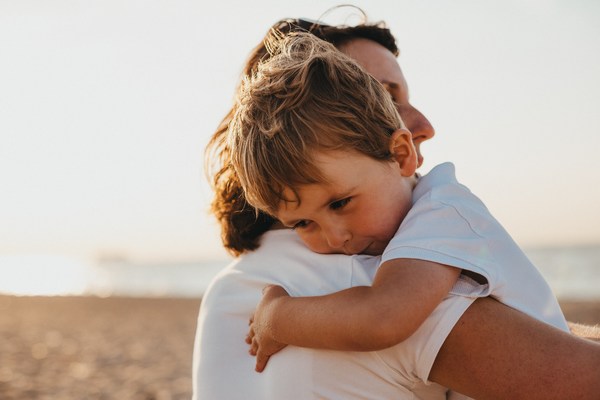 Whether you’re raising a son, daughter, or both, the lesson is the same. Forcing kids to give hugs against their will sends a very dangerous message. The bottom line is, don’t do it. Aunt Petunia will get over the momentary slight. Your kids, on the other hand, may never get over the lesson it teaches.