I hate to burst your bubble, but truly happy people don’t sit around sharing every single good thing that happens to them on social media. They’re way too busy enjoying their lives! Let’s discuss.

Last week, when we were talking about how life is too short to worry about little things, I quickly mentioned how social media can often cause more harm than good, mostly because of the way we use it. I thought that was worthy of a longer conversation. Way too many people spend more time writing status updates designed to make them SEEM like they’re having the time of their lives rather than actually going out and HAVING the time of their lives!

Don’t get me wrong, there’s nothing negative about sharing a bit of good news with your family and friends on Facebook or posting a picture of your new puppy on Instagram. Heck, it’s even fine to brag about yourself every now and then on Twitter if you want!

The problems start when you find yourself rushing to your phone to post something the very moment something positive happens. Or worse, when you’re so busy trying to frame the perfect Instagram shot to show the world how much fun you’re having that you end up missing all the actual fun.

MAYBE (and that’s a big maybe) using Facebook counts as “socializing,” if you’re actually using it to have real conversations with friends and family. Instagram and Twitter, though? Not even remotely. Instagram is all about posting only the most perfect parts of your life, then sitting back and waiting for validation in the form of likes. On Twitter, you’re lucky if one person sees your words before it’s buried in an avalanche of others. Over 6,000 tweets go out every single second.

Even scientists agree that “social” is a bit of a misnomer. Multiple studies, like this one, have found a strong connection between the amount of time people spend on social media and their overall mental well-being.

Like I said above, truly happy people aren’t really concerned with proving to the world just how happy they are. Instead, they’re soaking up every brilliant memory, because they know life is short. Let’s look at two scenarios and I think you’ll see what I mean.

Imagine that there are two moms (we’ll call them Betty and Veronica), both on a cruise with their families. Today, they’re both spending the day docked at an incredible beach with crystal blue waters, a place they’ll likely never get to visit again.

Betty gets off the boat, snaps a few pictures of her family with a cheap disposable waterproof camera before they dash off into the water. She left her phone in her cabin on the ship so she wouldn’t have to worry about it getting wet.

Throughout the day, she builds sandcastles with her kids, laughs as they splash her, oohs and ahhs over a pool of vibrant fish swimming past, and so on. The bottom line, she’s having an amazing day making memories that will last a lifetime.

Every now and then, she takes the cheap camera out and snaps a pic. That night, she collapses into bed, exhausted in a totally good way from the spectacular day that she had with her family. Five years later, her kids are still talking about what a great day that was. The disposable camera is in a drawer somewhere, forgotten, but the memories replay like movies in Betty’s head every time she thinks about them.

Veronica spends the morning before leaving the ship making sure her phone is fully charged, her kids are in their cutest bathing suits, and her hair is photo-ready. When the boat docks, she makes her whole family line up for a “before the beach” shot. “Let me just upload this to Instagram,” she says.

Her family anxiously waits for her to finish so they can actually get off the boat. Finally, they’re on the beach, but only after Veronica took about 500 more photos. After all, it takes 100 shots to get one good one, especially when your toddler won’t be still because she just wants to play in the sand.

The water beckons and her older son can’t wait to jump right in. Not so fast, little Archie! Mommy needs to take a picture of you running into the water. Don’t look so posed! Look like you’re excited! No, not that excited! Stand still!

Every single moment of the day continues much like this. Veronica doesn’t let her kids splash her, because that would mess up her hair. She can’t actually go in the water because she doesn’t want her phone to get wet. She misses the pool of fish because she was taking a selfie. Throughout it all, she’s posting away on Instagram and Facebook, making sure the world knows she’s having a blast.

That night, she overhears Betty talking to her kids. “Remember when that fish that looks like Dory swam past and everyone ran to see it? Or when the whale jumped out of the water in the distance? Oooh, or when the…” She hears Betty’s family recounting the entire day and wonders, “Where was I? How did I miss that?” Five years later, she barely remembers a single moment of that day, even when she’s looking at all the pictures. 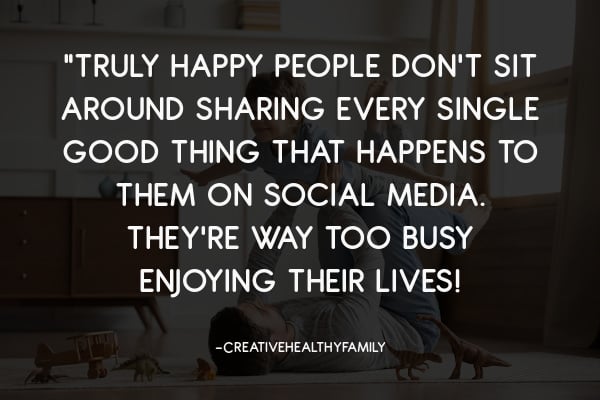 The point is when you’re spending all of your time making sure to frame up the perfect shot to show everyone how amazing your life is, you miss an awful lot of really amazing stuff. I’m not saying that you shouldn’t take photos at all. Of course, you should! It’s fun to look back through old pictures and share memories with each other.

I’m just saying that you miss A LOT when you’re looking at everything through the lens of a camera (or the screen of your smartphone).

So take a few impromptu (and totally unposed) shots here and there for posterity’s sake. Then ditch the iPad or put your phone away and join in on the memory-making. You’ll never regret it, I promise.