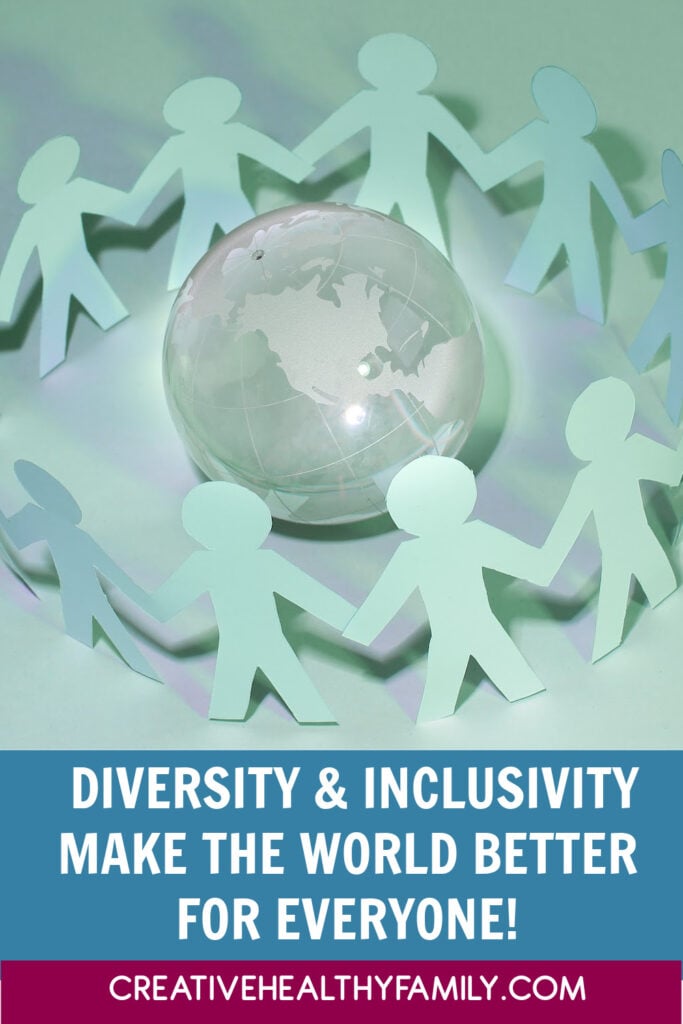 If you ever want to get people really riled up, just mention the words “inclusivity” and “diversity.” Why are these words so triggering, though? When did including others that aren’t like us become such a terrifying concept? Without these things, the world would be a pretty bleak place! Let’s discuss.

Without getting too into politics, I just want to give a little context to what inspired this post. Recently, a local school painted a mural meant to inspire inclusivity and diversity of ALL people. While many thought it was a beautiful way to combat bullying, some parents lost their proverbial poop over it. You wouldn’t believe the things people said on an elementary school chat board.

I don’t want to repeat the things they said here. Let’s just say they were absolutely livid, convinced that the school was trying to change their kids and “teach” them to be something different.  Once I could see past my outrage over their behavior (and believe me, that wasn’t easy), it really made me stop and think. When did “diversity” and “inclusivity” become dirty words?

How did we, as a society, get to the point where we feel that including others somehow excludes us? Or that living in a world with people that are different from us someone threatens our existence? Were we always this way, and it just seems more obvious lately? Or has something changed in the very fabric of our nature?

Honestly, I don’t have the answers to those questions. I think it would take a massive team of cultural anthropologists decades to figure them out (and I bet they’re already working on it). I’m not a scientist. I’m just a mom who wants her kids to grow up in a world filled with love, respect, and tolerance…not all of this hatred that we see so much of today.

As I’ve said so many times before, though, if we want to raise kids that change the world, we need to start with ourselves. We need to have hard conversations with each other and figure out where all of this animosity is coming from.

So, with that in mind, I’d like to discuss why I feel that diversity and inclusivity are such positive things that we should strive for, and not the dirty words that people seem to think they are today.

Diversity and Inclusivity Make the World Better for EVERYONE

By their very definitions, inclusivity and diversity mean including EVERYONE and celebrating (or at least accepting) the fact that we are not all the same. That’s a good thing! After all, we’re not all the same, and every person on the planet does have an equal right to exist.

I promise you, if we make the world a better place for someone who doesn’t look or think like you, it’s not going to take away your “right” or ability to look and think a certain way.  Let’s try an example.

Say you’re going to a party where everyone was asked to bring just one fruit and you bring a bag of apples. Betty brings a bag of oranges, and Sue brings a sack of pears. When you get to the party, the host puts them all together into one beautiful big fruit basket.

Even though they’re all together in the bowl, your apples don’t stop being apples. No amount of spending time in the same bowl as oranges will turn them into one. It’s scientifically impossible for an orange to “influence” or “teach” an apple to change its color and flavor. Period.

The fruit is diversity, the basket is inclusivity. By including all of the diverse fruits in the basket, we’ve created something beautiful and unique. Yet all of the fruits still maintain their own individuality.

That’s our world. We’re all different. On our own, we’re each pretty extraordinary, but we’re still either just apples, just oranges, or just pears. Together, though, we make up something truly unique and beautiful.

Without diversity, we wouldn’t be here today

Ask yourself where we’d be as a civilization today if everyone was exactly the same. Seriously, for a moment, imagine that every single person on the planet acts and thinks exactly as you do. I’m not just talking philosophically, either. Imagine that we’re all clones of you.

Second, I wouldn’t be typing this right now because I don’t know how to program a computer, build a keyboard, invent the internet, and whatever other magic goes into making it possible for me to type words here and let you see them there.

My point is, without diversity…without a planet full of people who think about things in different ways…we’d have literally nothing. I don’t even think we’d exist as a species. We would have gone extinct because we wouldn’t have that cave person who was really good at NOT choosing saber tooth tiger dens as our homes.

Peace Begins with Tolerance and Respect for Everyone

I saw the quote above shared on Facebook, and it really fits what I’m saying here. If we ever want any semblance of peace on earth, we have to learn to at least tolerate one and other. Respecting each other would be much better, but I’m realistic enough to know that full mutual respect just isn’t probable.

But tolerance? That’s something that we can learn. The word “tolerate” means “allow the existence, occurrence, or practice of (something that one does not necessarily like or agree with) without interference.

Literally all we need to do to achieve full tolerance is simply allow each other to exist. To accept the fact that no one person or group of people is more worthy of existing than another. How is that so complicated?

Like it or not, the fact remains that the world has always been, is now, and forever will be made up of people who all look, think, feel, and act differently from us. We have three choices:

You have to decide for yourself what kind of person you want to be. I love diversity and inclusivity, so I choose to do the first. I wouldn’t want to live in a world where everyone is the same. Would you?