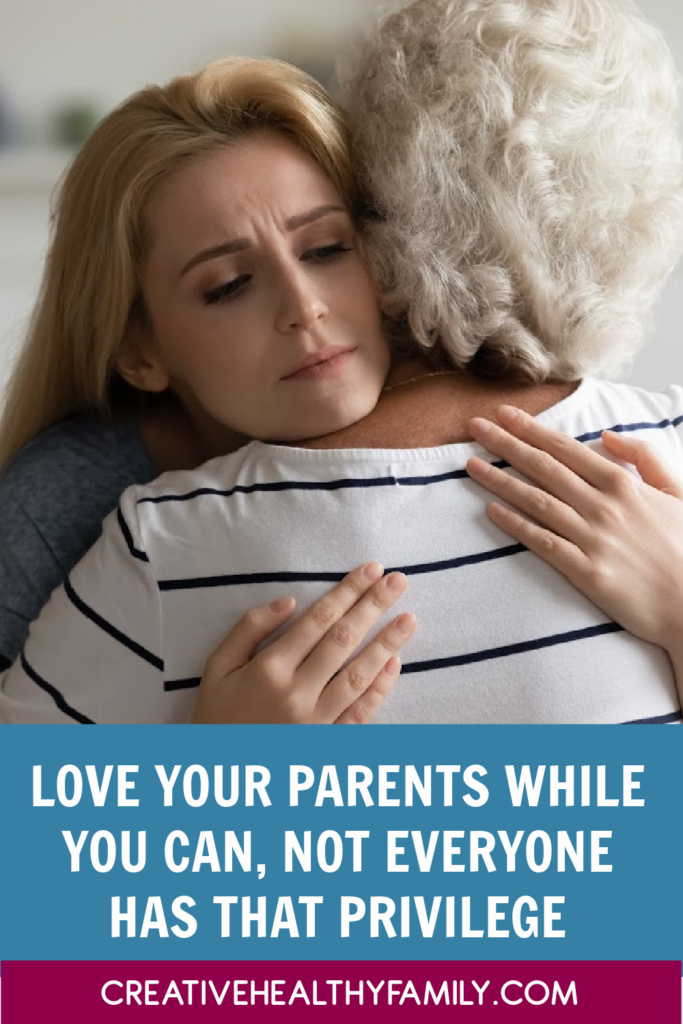 Lately, I’ve really been thinking about how important it is to respect and love your parents while you can because so many people don’t have that privilege anymore. How we need to care for them as they get older, even if they didn’t always care for us just right- so that we don’t live a life of regret later. Let’s discuss. 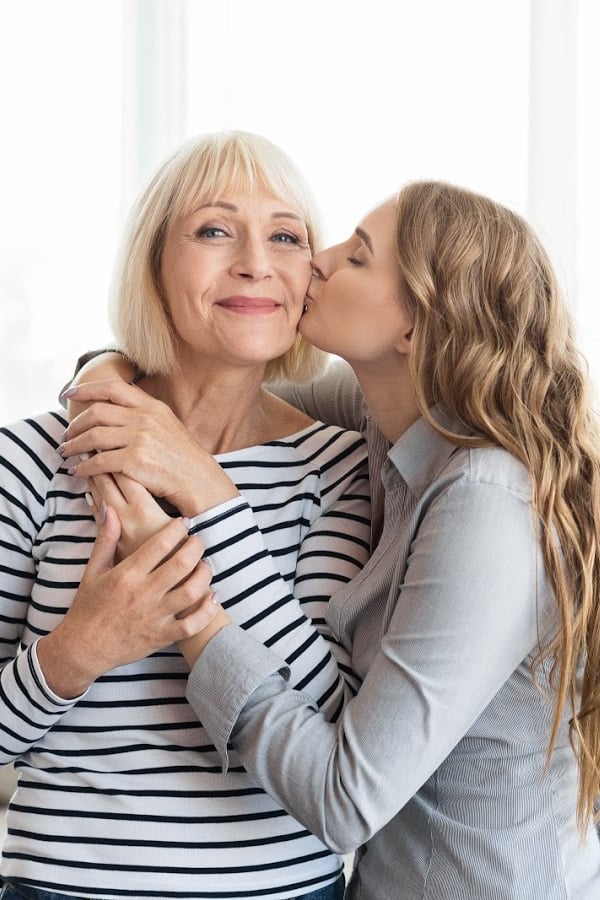 Respect & Love Your Parents While You Can

Earlier this week, a friend shared one of those trendy quote memes on Facebook. It said something like “love your parents because not everyone has that opportunity.”  I was checking out the comments, and one conversation really stood out. I won’t share it word-for-word here because it was on a private page, but I’ll give you the gist since it inspired me to write this post.

Basically, friend A (we’ll call her Sue) made a comment about how her mom makes it so hard to care for her because her beliefs are so fundamentally offensive to Sue. She said that while she’ll always love her mom, she just “can’t deal with her,” so they don’t speak. Friend B (we’ll call her Betty) replied with a heartbreaking comment. She said that she empathized with Sue because she stopped talking to her dad for the same reason: a major difference in political opinions.

Then came the heartbreaking part. Betty said she’ll regret it for the rest of her life because her dad died earlier this year. She never got the chance to make things right. Never got the chance to care for her dad the way he cared for her when she was little.  She’ll never have that opportunity again, just like the quote said. 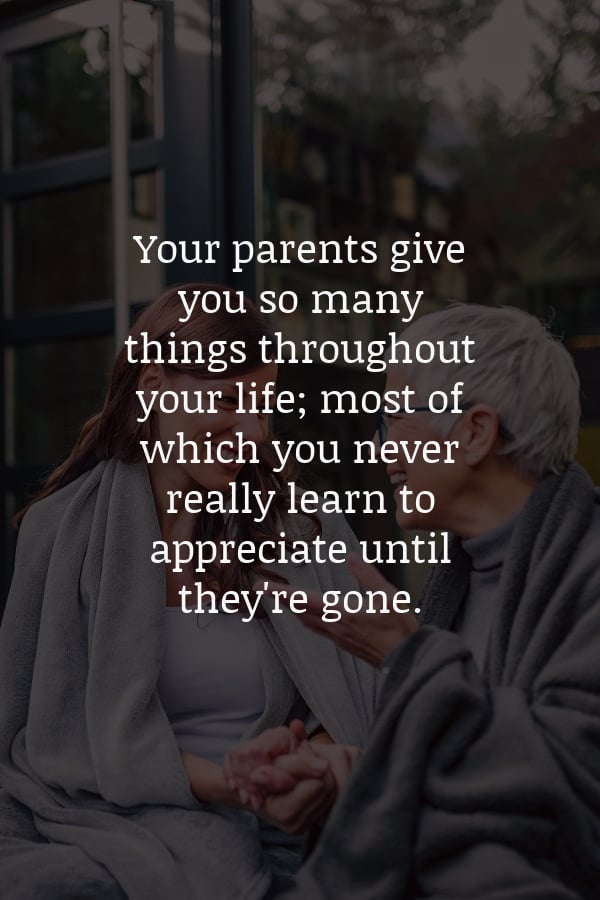 We truly never know how much time we have left

I’ve said it so many times in the past, but it bears repeating -we truly have no idea of just how long we’ll have with our parents. This last year has really proven that beyond a doubt. Way too many kids- both young and old- were forced to say goodbye to mom and dad long before they were ready (although we’re never truly ready). For those who made the most of the time with their parents, at least they’ll always have those memories to hold onto. Sadly, way too many now live like Betty, with regret over the things left unsaid, the time left unspent, the hugs left ungiven.

It’s easy to respect and love our parents when everything is great between us. If you get along with them, caring for them really doesn’t take much effort. It’s not even something you think about, something you need to be reminded to do. You just do it, as naturally as breathing.

What if everything isn’t great, though? Maybe, like Sue and Betty, you clash with them over politics, religion, or other major fundamental issues. Perhaps you’ve never gotten along with them in the first place. What if caring for them isn’t really something that comes naturally to you?

If that’s the case…, do it anyway. I know, that sounds like such a dismissive thing to say, so let me elaborate a bit. 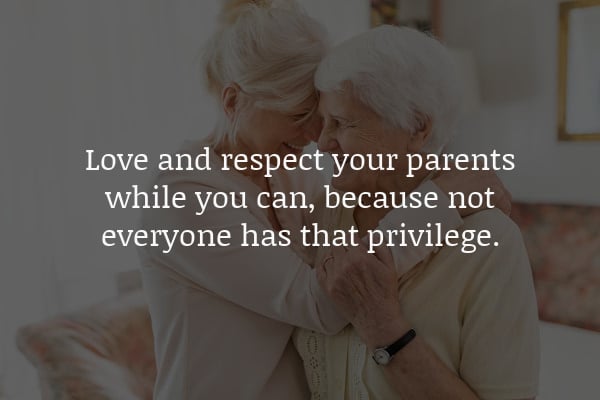 I want to make excuses for their parents because it’s hard for me to fathom not being there for my own children. To say, “Oh, well their generation was different,” or “maybe they did the best they could in difficult circumstances.”  The truth is there’s no excuse that will bring them comfort, that will make it okay. There’s very little more painful in this world than feeling like your own mom or dad abandoned you or didn’t really love you. So how on earth can I say “care for them anyway” with a straight face? 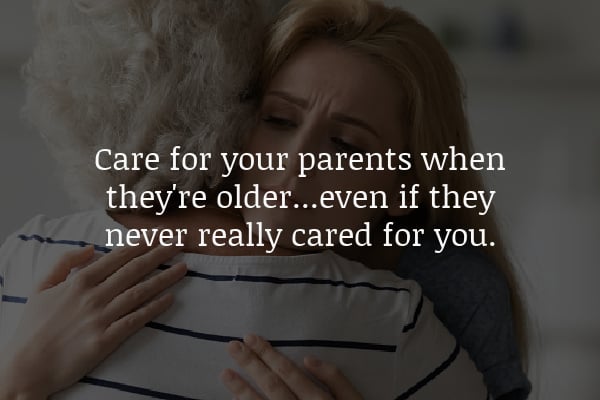 Here’s the thing: caring for those parents- those who never cared for you- has nothing to do with helping them and everything to do with helping yourself. For your own peace of mind, do it so that you never have to live with regret. Because even if you think you don’t give two hoots about those people who weren’t there for you, when they’re gone you may feel differently. By then, it’ll be too late.

A friend of mine thought she didn’t care a shred about her father. He was never there for her a day in her childhood. In fact, he only reached out after she was an adult. She thought that right up until the day he died. Heck, she thought it for over a decade after that. Then, one day out of the blue, she suddenly did care. Of course, it was way too late by then.

Do it so that 20, 30, even 40 years from now, you’re not sitting there on the other side of the equation with your kids caring for you, wishing that you’d maybe made more of the time you had left with them. I hope that makes sense. Basically, if you can’t do it for them, do it for yourself.