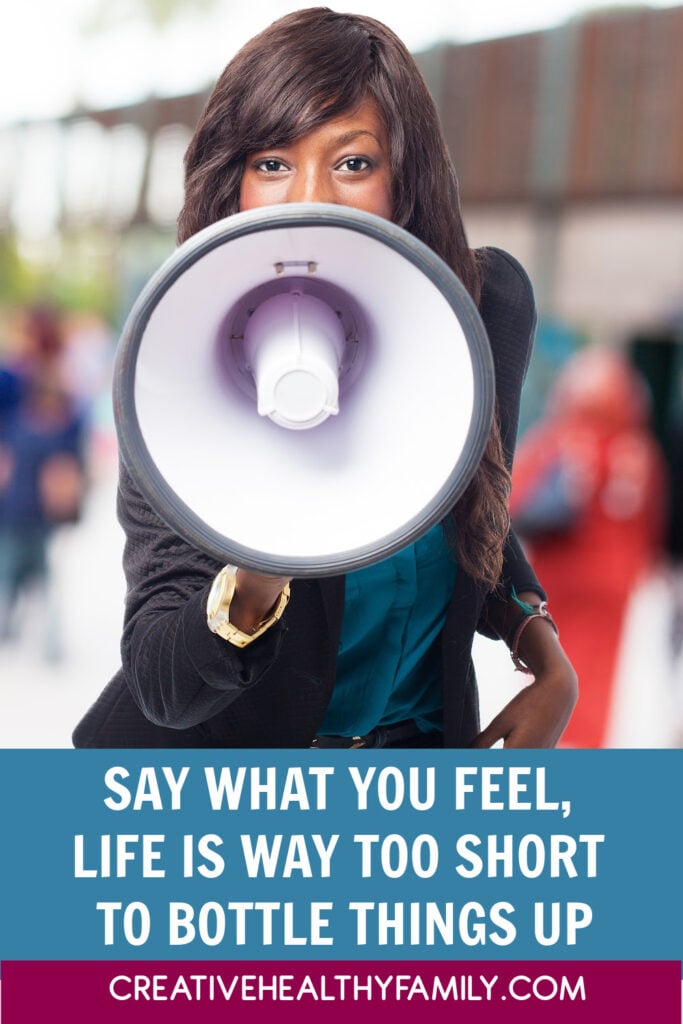 I saw a meme the other day that said, “Say what you feel. It’s not being rude; it’s called being real.” I agree with that 99% of the time (there are exceptions, of course). Life is WAY too short to bottle things up! Let’s discuss! 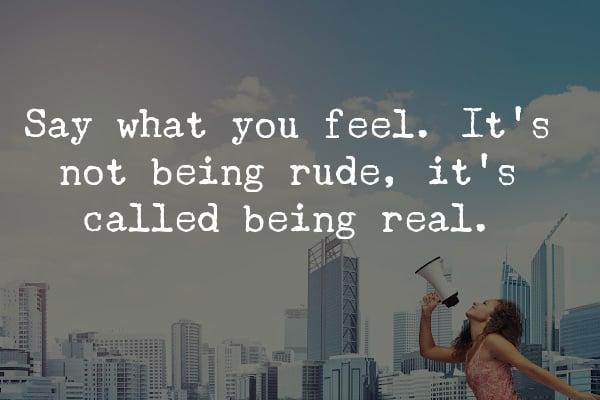 Say What You Feel, Life is WAY Too Short to Bottle Things Up

Of all the creatures on this planet, we humans seem unique in our extraordinary ability to shove down every single emotion that we feel and lock it away. You don’t see lions, tigers, and bears (oh my!) bottling up their emotions. When they’re mad, they roar!

Cats hiss when scared. Dogs yelp when hurt. Every other animal on the planet walks around with their hearts on their sleeves for all of the world to see. Then there’s us. We walk around with a metaphorical cork on our “emotional bottle,” just letting it build up pressure until it has no choice but to burst free. Boy, when it does, watch out! I’ve seen even the nicest people become terrifying when they finally let it all out!

Why do we let it get to that, point, though? Why are we so afraid to speak our truths and let our hearts hang out on our sleeves for all to see? Scientists and psych majors have been trying to figure that out for years. The best they can figure, it seems, is that it’s all about shame and conditioning.

We’re conditioned to keep things inside…

We’re told from a very young age to “shush.” From the day we’re born, even as our moms hold us, they’re quietly saying (with the best intentions) “shhhh, shhh, shhh” as they rock us. Later, we’re told to stop whining. Stop crying over little things. Even to stop shouting with glee over something that makes us happy. Shhhhh. Shhhhh. Shhhh.

Along the way, we’re taught more lessons on keeping our emotions to ourselves. Don’t speak out of turn or talk about others. Don’t monopolize the conversation. Most important of all, don’t show vulnerability or “weakness.” Never, ever, ever let them see you cry.

So, it’s no wonder that by the time we reach our adult years, we’ve become masters at keeping quiet, at hiding our emotions and bottling them up. While there’s logic in all of those lessons (as I said earlier, on rare occasions we do need to keep our thoughts to ourselves), I really think it’s done more harm than good to our psyches.

I also think we need to take the “shame factor” out of our emotions. I saw another quote that said, “Never be ashamed of what you feel. You have the right to feel any emotion you want, and to do what makes you happy.” Let’s talk about that a bit more. 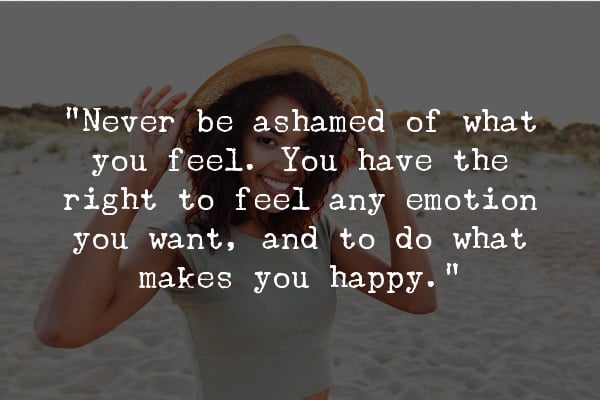 You can’t change your feelings, so stop shaming yourself for them

In a study about the power of shame, Thomas Scheff, professor emeritus of sociology at UC Santa Barbara, said “Our society — our civilization — is civic respectable. You’re not to be angry and you’re not to be ashamed.”

The thing is, we let shame force us to hide our emotions, especially those that we feel would make us appear “uncivilized.” However, feelings, by their very nature, are things that we can’t exactly control. If you’re mad, you’re mad. If you’re happy, you’re happy. No amount of logic or rationalizing will change that. The only thing you can do is talk yourself out of expressing your anger or happiness. Nine times out of ten, that involves shaming yourself into hiding them.

You’ll tell yourself, “I am overreacting and making a big deal out of nothing” when you’re mad. Or perhaps, “I shouldn’t be happy about my success when so many people are struggling” when you’re filled with glee. Either way, it’s all about making yourself feel bad for feeling the way you feel, and that never ends well.

Bottling things up is bad for your health

Did you know that a 2016 study found that couples who bottle up their emotions actually have more heart problems and back problems than those who don’t?  Another one found that people who bottle things up and hide from their true feelings suffer from anxiety more than those who let them out.

Oh, and if you try not to say what you feel in front of your kids to protect them or shield them, you may want to read this study. Researchers found that it’s actually better for your kids to see you dealing with your negative feelings in a healthy way than to watch you try to tamp them down. Besides, yet another study found that kids can almost always tell when you’re suppressing things anyway. Teach them that showing emotions is a sign of strength, not weakness.

When SHOULDN’T you say what you feel?

Look, I’m not giving you a free pass to be unkind here.  Obviously, there are times when staying silent is the better choice. Sometimes, you literally just have to say what you feel, then recuse yourself from the conversation. For example, “I’m feeling very mad right now. I don’t want to say something that I don’t really mean. Give me some space and we’ll talk about it when I feel calmer.”

It’s also important to know when to say what you feel. For example, don’t tell Auntie Mary that you’ve never really liked her husband when you’re in the middle of his funeral, or tell your best friend that you just got promoted two seconds after she tells you that she lost her job. You can say what you feel and still be a decent human being. 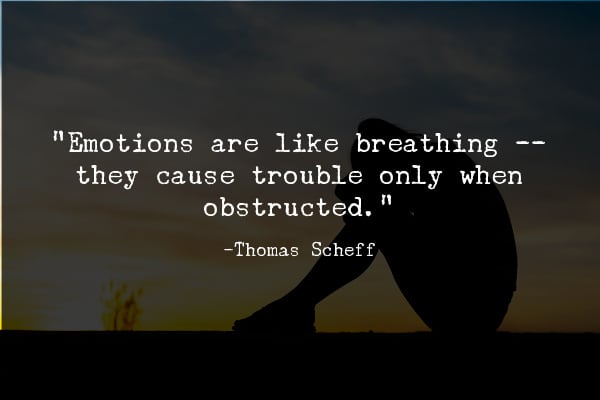 As Scheff said, “Emotions are like breathing — they cause trouble only when obstructed.” So stop obstructing them. Stop bottling things up or hiding your true feelings. Say what you feel! Wear your heart on your sleeve, show your sensitive side. Most important of all, stop shaming yourself for feeling how you feel.