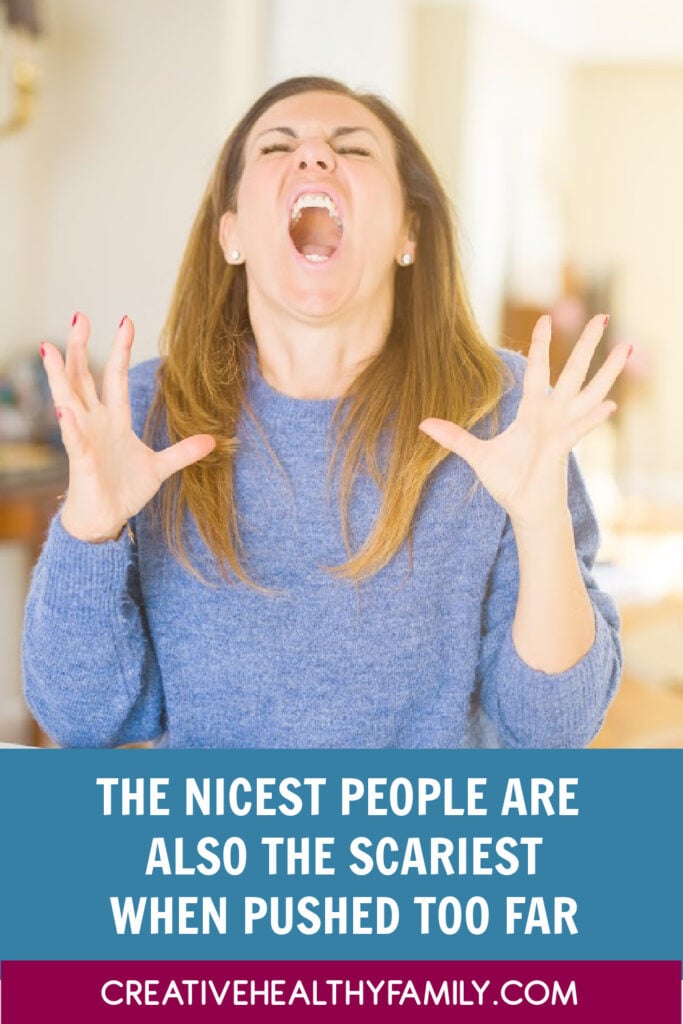 I saw this quote the other day that said, “Even the nicest people have their limits. Don’t try to reach that point because the nicest people are also the scariest when they’ve had enough.” As a nice person myself, I can tell you with 100% certainty that when we hit our breaking point, we’re a force to be reckoned with!

The Nicest People Are Also the Scariest When Pushed Too Far

We all have that one friend (maybe it’s even you) who has a seemingly endless supply of patience and kindness. She can take A LOT of BS and still keep smiling. Things that would make most of us livid don’t seem to faze her.

No matter what happens, she always looks for the good and never assumes the worst of people.  For example, when most of us get cut off on the highway, we think “What an [insert long string of expletives here]” and flip them off. Not her. She thinks, “Maybe his wife is in labor!” or “Perhaps she’s racing to say goodbye to a loved one!”

When she does finally hit her breaking point, though; she’s downright terrifying, and it really shocks most people. I can relate because when I get mad, everyone around me looks at me like I have two heads. They’re not used to seeing it, so they don’t think I’m capable of it. Trust me, though, I am, and when I do rage at you, you better believe you earned it. You also better believe that you’ve just used up your very last chance with me.

Nice People Never Rage Without Reason, So Pay Attention When They Do

It takes a whole lot to make me really mad, or at least angry enough to actually raise my voice. I’m talking A LOT a lot. Don’t get me wrong, there are plenty of things that bother me or irk me. I just often don’t see the point in yelling about it, especially if yelling won’t change anything.

For example, my new puppy had an accident on the carpet. Was I aggravated? Heck yeah! After all, no one wakes up thinking, “I can’t wait to clean up doggy doo today!”  But yelling at the puppy wouldn’t have changed anything. Whether I’m mad or not, the mess still needs cleaning. I can either yell about it for ten minutes and then clean it up or just clean it up and be done with it.

We save our rage for the right time

There’s a big difference between being annoyed and being downright angry. I save my real rage for things that deserve it. Things that can’t be ignored, that really affect my life- or the lives of those I care about. Betrayal of trust. Harm to my family or loved ones. Acts of cruelty.  These big things deserve BIG rage, and I want to make sure that you know you crossed a line.

Imagine that you’re the object of my anger. If I constantly yelled at you for every little thing, you’d eventually tune me out. So, when you do something incredibly awful and I yell about it, you probably won’t even notice. You’ll just think, “Oh look, she’s mad at me again. Big surprise.”

If I never yell at you, then one day let loose with the rage, you’ll definitely notice. You’ll know beyond a shadow of a doubt that you’ve done something totally and utterly awful. Maybe even unforgivable (and we nice people are pretty darn forgiving, so that’s saying a lot, too). We nice people are smart. We know how to use anger effectively! 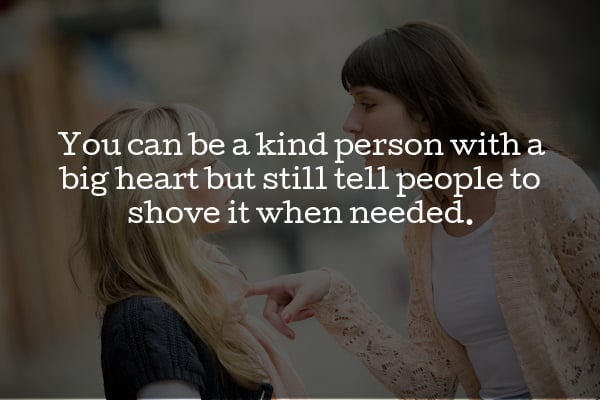 Yes, nice people are still human, and NO, they’re not trying to manipulate you

I was going to end with that last section and send you on your merry way. Then, while looking for quotes about nice people who’ve had enough to add to this post, I came across an article that really irked me. It said something like “nice people don’t allow themselves to be fully human.” That we “conceal emotions” in some sort of effort to manipulate others. Seriously???

Look, I’m as human as you. Just because I don’t scream my head off at you when- for example- you break my favorite coffee mug doesn’t mean I’m not bothered by it. I just don’t see the point in yelling about something that was an accident. I assume that you already feel bad enough about it. Why would I want to make you feel worse? It’s not like by yelling I’ll somehow magically rewind time and put my mug back together.

There’s a really big difference between hiding emotions and showing restraint. One is unhealthy while the other is called being civilized. Nice people know how to show restraint. However, just like literal restraints can be stretched too far and end up snapping, so can we. When that happens, watch out! The rest of the time, though, we really are as nice as we seem!