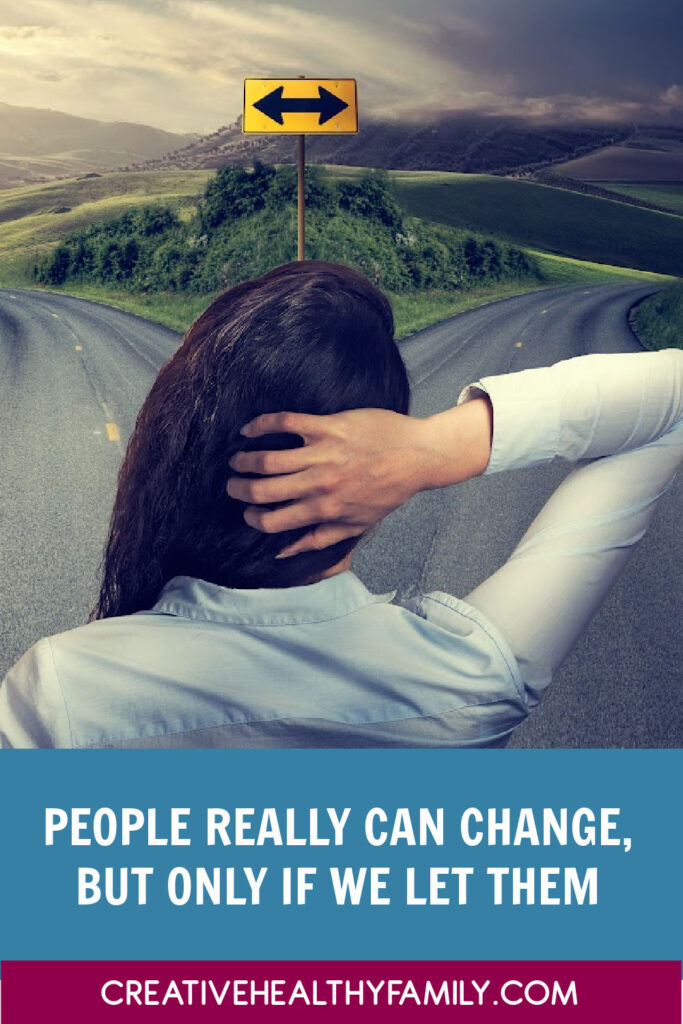 Can people change? Like REALLY change? Yes, absolutely…IF we actually let them! We have to stop judging everyone by who they were in the past and start looking at who they are today. Let’s discuss. 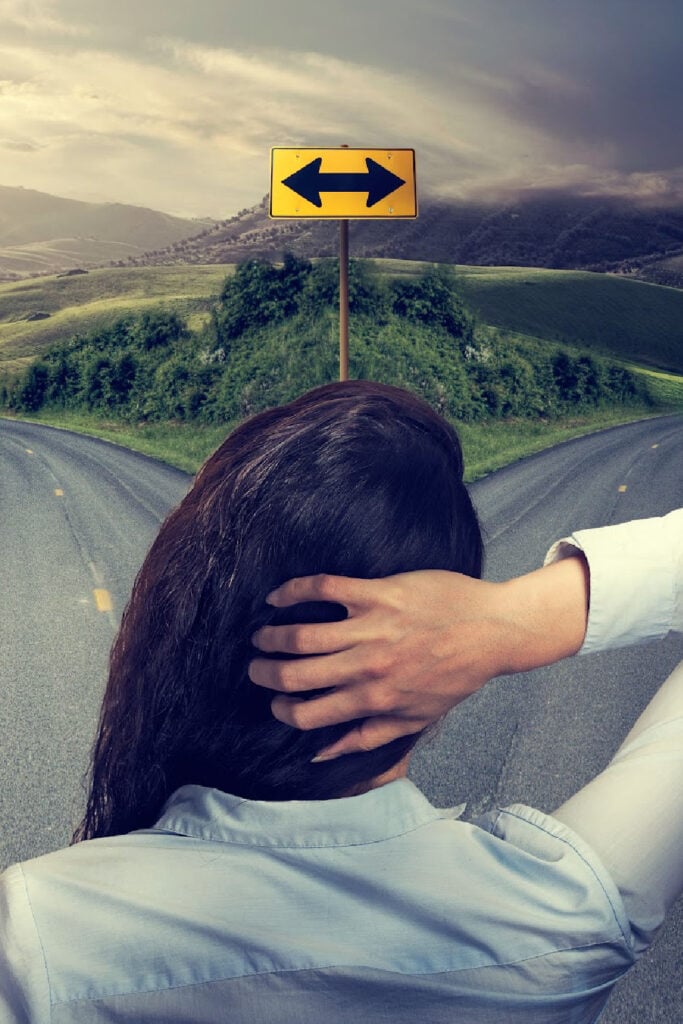 Can People Change? Yes…But Only If We Actually Let Them!

I’ve been thinking about this a lot lately, how we as a society are so stuck in this belief that people never change.  It’s probably among our most ridiculous assumptions about ourselves. We’re literally nothing BUT change.

In fact, by the time you reach the end of this sentence, you’ll be a different person on a cellular level. Somewhere in your body, a cell is dying, dividing, or being reborn. Sure, it’s not enough change to make you a whole new person, but it proves my point. We are made, unmade, and remade again constantly.

I know, I know, I’m being too literal. When we say, “people never change,” we’re talking about their personalities, not their cells. I still call BS, though. I absolutely believe that we all change, grow, and even become entirely different people over the course of our lives.

We’re not the same people we were decades ago

Are you exactly the same person as you were in high school? I know I’m not! The things that were important to me at 17 aren’t even on my radar today. I’ve matured both mentally and physically, inside and out.

The same goes for almost everyone I know. Friends who were “party girls” in high school now consider staying up until 11 PM binging Netflix a “hot Friday night.”  Others spent their early 20s barhopping and drinking like actual fish barely make it through a glass of wine without getting tipsy today. Girls from different cliques who fought like crazy 30 years ago are best friends today. 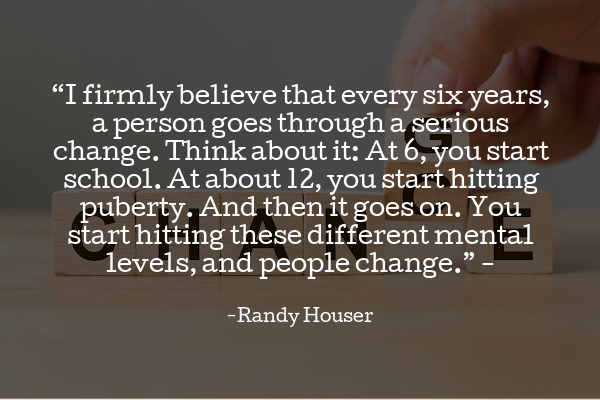 Maybe you’re thinking, “There’s a big difference between maturing or outgrowing something and becoming a totally different person. People don’t change who they REALLY are deep down, especially when it comes to the big things like politics, racism, sexism, and whatnot. You know, the IMPORTANT stuff!”

Again, I call bunk.  Let me explain why, using a friend’s story. She spoke on the condition of anonymity, so I’m not using her real name.

Even the kindest people have skeletons in their closet

Today, Betsy is a 40-year-old mom with a heart of gold. She’ll drop everything to help a friend in need. Heck, she’d even help a stranger without thinking twice. She’s passionate about civil rights, women’s rights, helping the planet, saving animals, and promoting general peace and well-being for everyone.

She wasn’t always like that, though. When she was a very young teenager, her mental health issues brought on by extreme trauma made her incredibly impressionable. Rather than forming her own opinions, she let others tell her what to think. Sometimes, she let really awful people tell her to think really awful things.

Without going into detail, she said, “Let’s put it this way- if someone dug up my journal from when I was 13 and posted it on social media today, I’d instantly be ‘canceled” for all time.’ I’d be done, over, ruined for life.”

She’s not alone. I know so many people with similar stories. Schoolyard bullies now lead anti-bullying programs in schools. People who struggled with addiction and found their way to recovery now help others in the same position. Even those who once held some of the nastiest beliefs- racist, sexist, or just plain cruel-now fight to help make the world a better place for everyone.

These people had one major advantage that we no longer have today, though. They grew up before the internet. Before it became trendy to document every single mistake and ensure that no one ever, ever lives them down. Before we stopped judging people by who they are now but rather who they were years- even decades- ago.

I’ve noticed a major trend on social media where a celebrity shares a good deed and someone immediately runs to dig up ancient dirt that’s contrary to what they’re saying. That person then calls for their “cancellation,” and we, as a society, comply.

For example, Jonny B. Famous is passionate about the environment. He spends his weekends cleaning up the ocean and picking up litter. He even put his money where his mouth is and started his own conservation group. Basically, he doesn’t just say he loves the planet, he shows that love in everything he does.

One day, after Johnny B shares something on Instagram, Joe Notafan comments with something like, “Hypocrite! In 1999, you said global warming was a hoax! Cancel Johnny!”  In a rational society, we’d all respect Johnny’s journey and acknowledge that while he said some dumb things decades ago, all the good he’s done since shows that he’s truly changed. We’d tell Joe to stuff it.

Unfortunately, we’re not really living in a rational society these days. So, we call for Johnny’s proverbial head (at least we’re not so far gone that we’re calling for literal heads to roll). He loses his movie contracts. He’s barred from the industry, and no one wants to hire him ever again. His own conservation group’s board votes him out, then ends up closing their doors altogether because of the negative connotation associated with Famous.

He’s not just canceled, all the good he’s done and could continue to do gets wiped out entirely. All because we hold on so tightly to the past that we squeeze the very life out of the present.

We need to judge people by who they ARE, not who they WERE

Think about your own past. Maybe you never did, said, or thought anything really awful, but I bet there’s at least one thing you’d rather forget. No one makes it to adulthood without taking a few wrong turns along the way. Would you want someone to judge you by the person you were decades ago? So then why is it okay to do that to others?

Now, I’m not saying that we should just wipe everyone’s slate clean with each new day and let bygones be bygones. Nor am I saying that our “cancel culture” is an entirely bad thing.  Sometimes people do unforgivable things, and no amount of new leaves turned over (pardon my mixed metaphors) can erase that. I totally support bringing those acts to light so that we can all decide for ourselves just how unforgivable they are.

However, if someone shows you- REALLY shows you- that they are not the same person they were years ago AND if their former acts are forgivable, then please…forgive them.  Give them that clean slate. We have to LET people change. Let them make mistakes and own up to them. Otherwise, we’ll continue to live in a society where people won’t even bother trying to make the journey to becoming better people.