I came across a quote recently that said something along the lines of “the best way to say you’re sorry is to change your behavior.” I completely agree, don’t you! When it comes to apologizing, there’s definitely a right and wrong way to do it. Read on for some thoughts on how to say sorry like you really mean it. 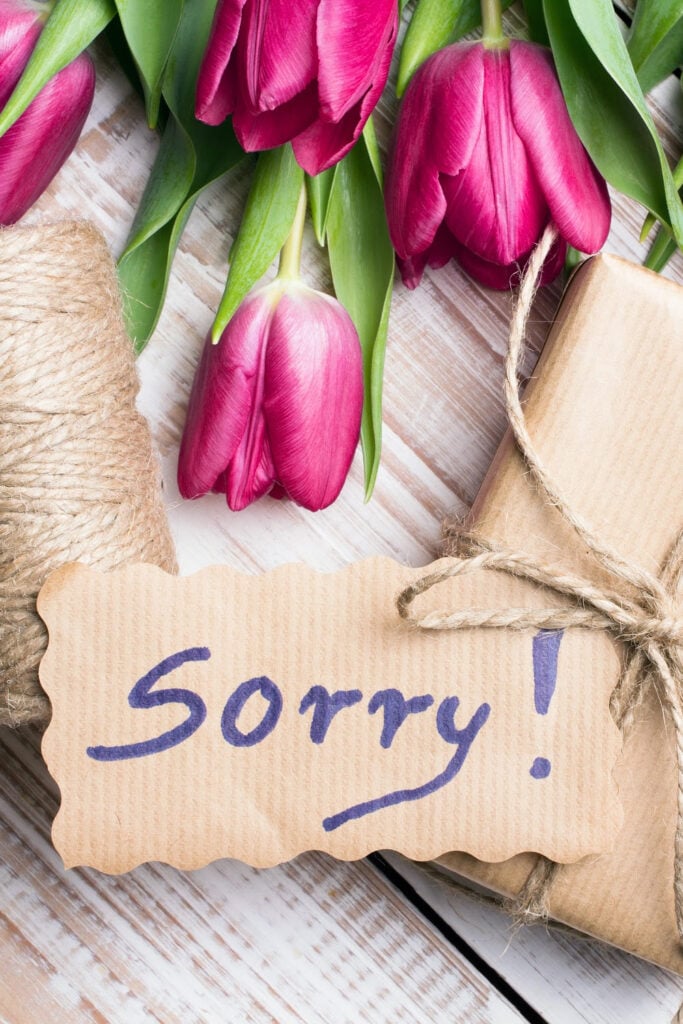 How to Say, “I’m Sorry” Like You Really Mean It

Apologizing doesn’t seem to come naturally to us humans, does it? I wonder if it’s something written in our genetic code. Like, maybe a throwback to our early days where admitting that we’re wrong meant getting eaten by a tiger or something. Hey, it’s feasible. Most of our worst traits are holdovers from our prehistoric days!

It doesn’t even seem to be a learned trait. I’ve always modeled good apology behavior, and still, my daughter has a hard time saying it. She’s not alone! I hear so many tales from other parents who talk about how “stubborn” their kids are when it comes to something as seemingly simple as saying “I’m sorry.” So that just makes me think even more that it’s something ingrained within us.

Of course, that doesn’t mean we can’t overcome it and learn how to say “I’m Sorry” like we really mean it! We just have to work harder at it. When it comes to apologizing, there are a few very simple rules that I live by. Let’s discuss. 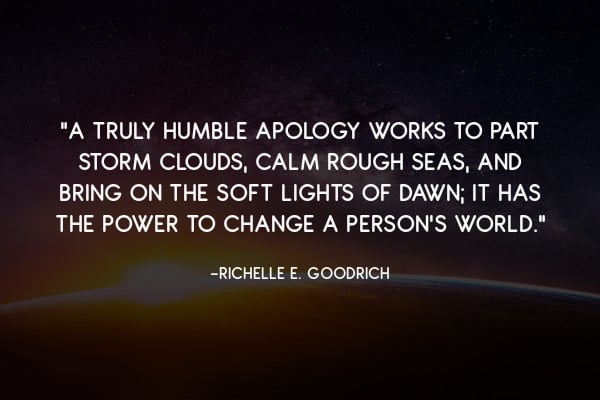 Rule #1: Never be too proud to admit when you’re wrong.

Look, there isn’t a single living person on this planet who has been right 100% of the time. We ALL make mistakes. So why is it so hard for us to admit when we make one? Pride, pure and simple. We’re too proud to own up to what we did wrong, said wrong, or got wrong.

So, the first rule to apologizing like you mean it is to confront that pride head-on. Look in the mirror and tell yourself, “Being wrong doesn’t make me less of a person. In fact, it’s part of what makes me human. I am proud to be human, so, I am proud to own up to my mistakes.”

Once you overcome your pride, apologizing gets a lot easier. Still, there’s more to saying “I’m sorry” like you really mean it than just saying the words.

If you follow “I’m sorry” with a “but,” you’re doing it wrong. The word “but” automatically voids your apology by removing the blame from yourself and placing it elsewhere. In fact, way too often, that “but” places the blame solely on the other person, and that’s the last thing we want to do.

While we’re talking about not blaming the other person, be very careful of how you word your apology. Saying things like “I’m sorry your feelings were hurt by what I said” is basically the same thing as saying, “I did nothing wrong. You just took it the wrong way.” Despite what many politicians (on both sides) would have you believe, that is NOT an actual apology. 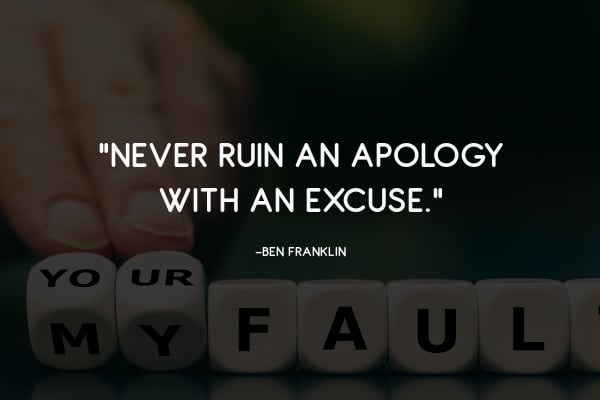 Rule #3 The BEST way to apologize is to change your behavior.

Last- but also most important- an apology is just empty words if it’s not followed by a real change in behavior. Say you like to joke around, and you genuinely think you’re being funny when you tease your niece. You think it’s just “good-natured” jesting. She feels hurt and tells you so. You genuinely apologize, using rules #1 and 2.

Then, the next time you see her, you tease her again. She’s hurt again. You apologize again. The third time you see her, she won’t even come near you. Why? Because you’ve proven untrustworthy, to be blunt. You’ve shown her that you think just saying “I’m sorry” after the fact gives you a free license to continue your upsetting behavior.

Another scenario: you use a word that’s offensive to your friend Sally. She tells you exactly why it’s offensive and asks you to please not use it. You apologize and stop using it around her, but still continue to use it around others. Honestly, that’s not even remotely a genuine apology. You’re basically saying “I’m not sorry I did it, I just don’t want to hear you complain so I’ll pretend I am.” 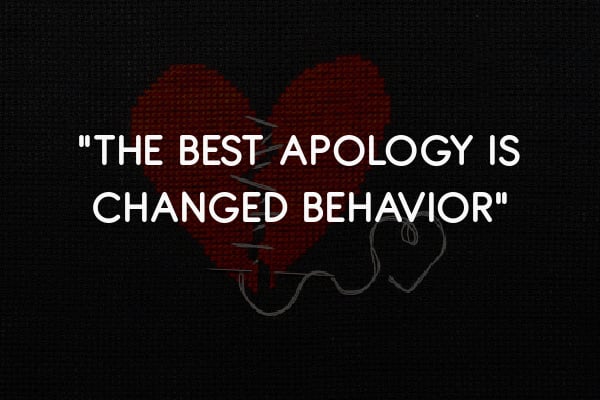 There’s only one RIGHT way to apologize.

When we take all of these rules and put them together, we come up with one very simple method of apologizing like we mean it. First, just say you’re sorry. That’s it. “I’m very sorry.” Don’t qualify it or try to excuse your behavior.

Then, make a solid and conscious effort to change your behavior. Don’t just do it to placate the person you upset. Really think about it. Ask yourself, “what did I do wrong, and what can I do better in the future?”

Some say that you should ask the person those questions, but I think it depends on your relationship with them.  If I did something to upset my best friend, then yes, I’d ask her, “What can I do to make this up to you and to make sure it doesn’t happen again in the future?” If I upset a stranger, though, it’s not really fair to put it on them to explain how to fix your behavior.

Like I said, apologizing doesn’t always come naturally to us, but we can learn how to be better at it. We just have to be willing to put aside our pride. Being wrong or doing something wrong doesn’t define your entire character. An inability to admit to it, though, does. 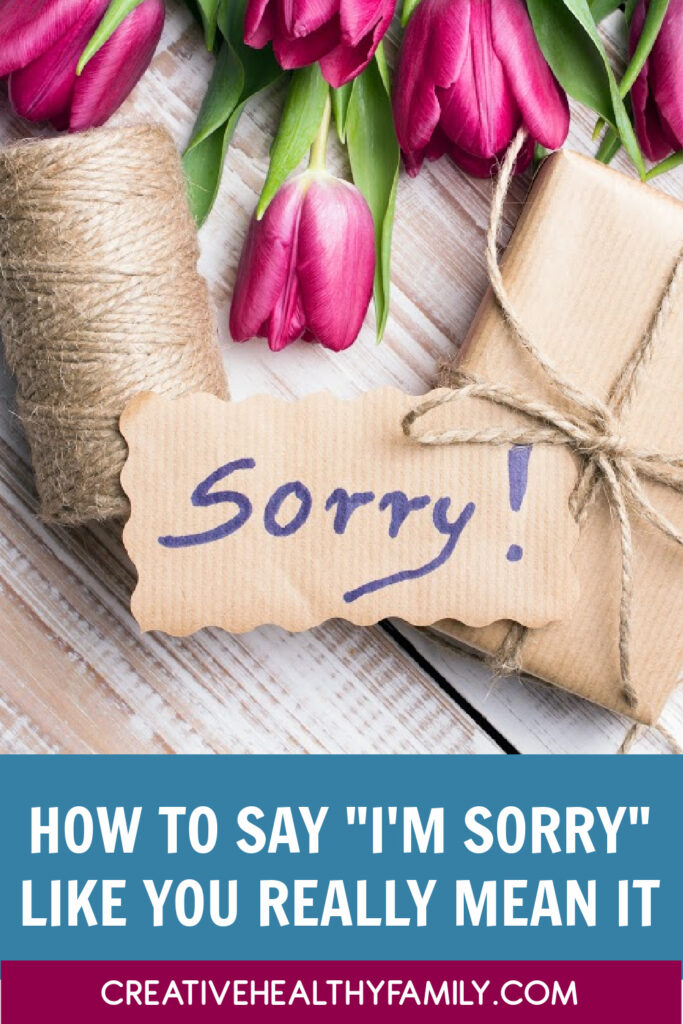