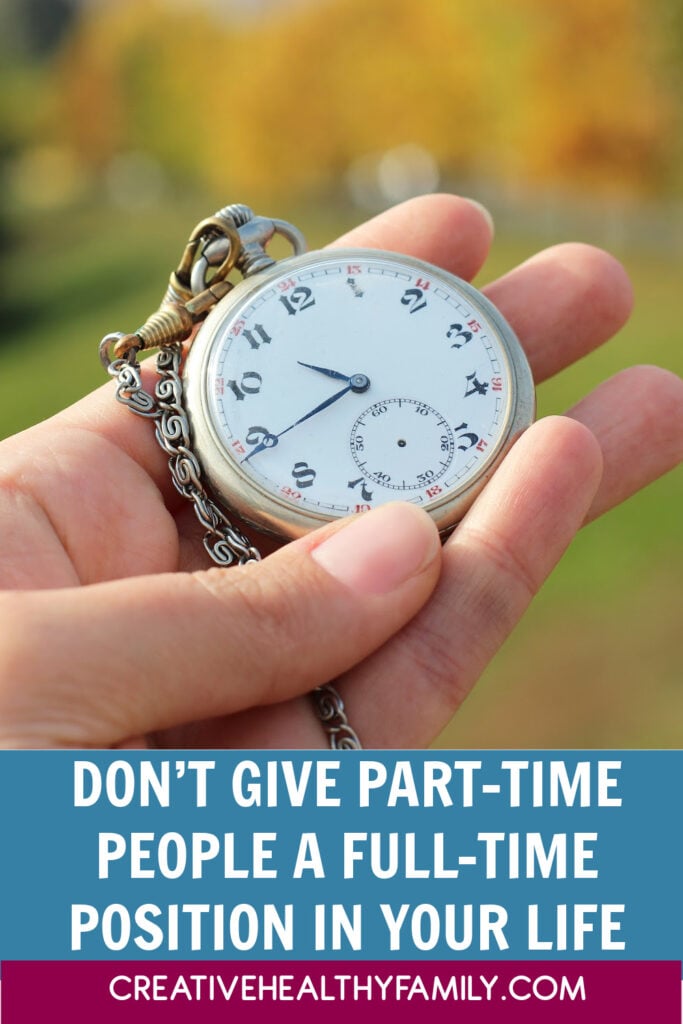 “Don’t give part-time people a full-time position in your life.” I saw that quote recently and it really popped out at me. What does it mean and why should we avoid doing it? I think it makes for a great discussion, don’t you? So, let’s get to it! 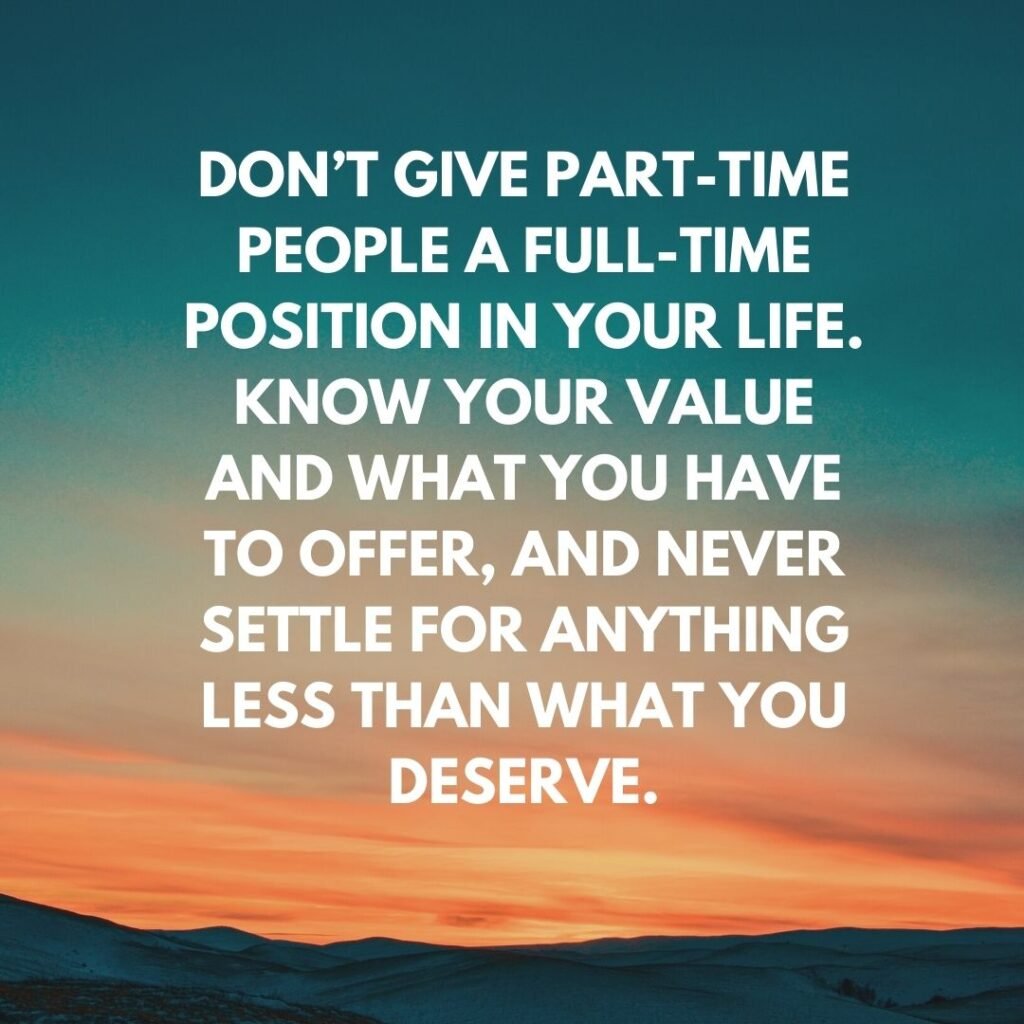 That line is actually part of a longer quote about knowing your value and not settling for less than you deserve. Let me quickly share the entire thing with you, then we’ll discuss.

When someone treats you like you’re just one of many options, help them narrow their choice by removing yourself from the equation. Sometimes you have to try not to care, no matter how much you do. Because sometimes you can mean almost nothing to someone who means so much to you. It’s not pride – it’s self-respect. Don’t expect to see positive changes in your life if you surround yourself with negative people. Don’t give part-time people a full-time position in your life. Know your value and what you have to offer, and never settle for anything less than what you deserve.

Isn’t that just a really great quote? I wish I knew who said it so I could give them due credit, but the author is unknown. Let’s break it all down because it’s really packed with some of the best advice. I switched it around a bit for flow.

Know your value and what you have to offer, and never settle for anything less than what you deserve.

At its core, the entire quote and the idea of not giving part-time people a full-time position in your life comes down to the last sentence. Put another way, know your self-worth and don’t ever let anyone undervalue you.

Sometimes, that’s easier said than done, though. I was discussing the topic with a friend who suffers from depression and anxiety. She said that even though she knows in her heart that she has a lot to offer this world, a little voice in her head says, “No, you don’t.”

“Some days, I feel like a diamond in a pawn shop,” she continued. “I know I’m worth a lot more than they’re offering, but I’m so desperate to feel valued at all that I just take what they give.”

Unfortunately, I don’t really have the answers to how to quiet that condescending little voice. The best I can come up with is to replace it with a louder voice that screams back, “Yes, I DO have value, and I won’t settle for less than I deserve!” Repeat it over and over until you believe it. 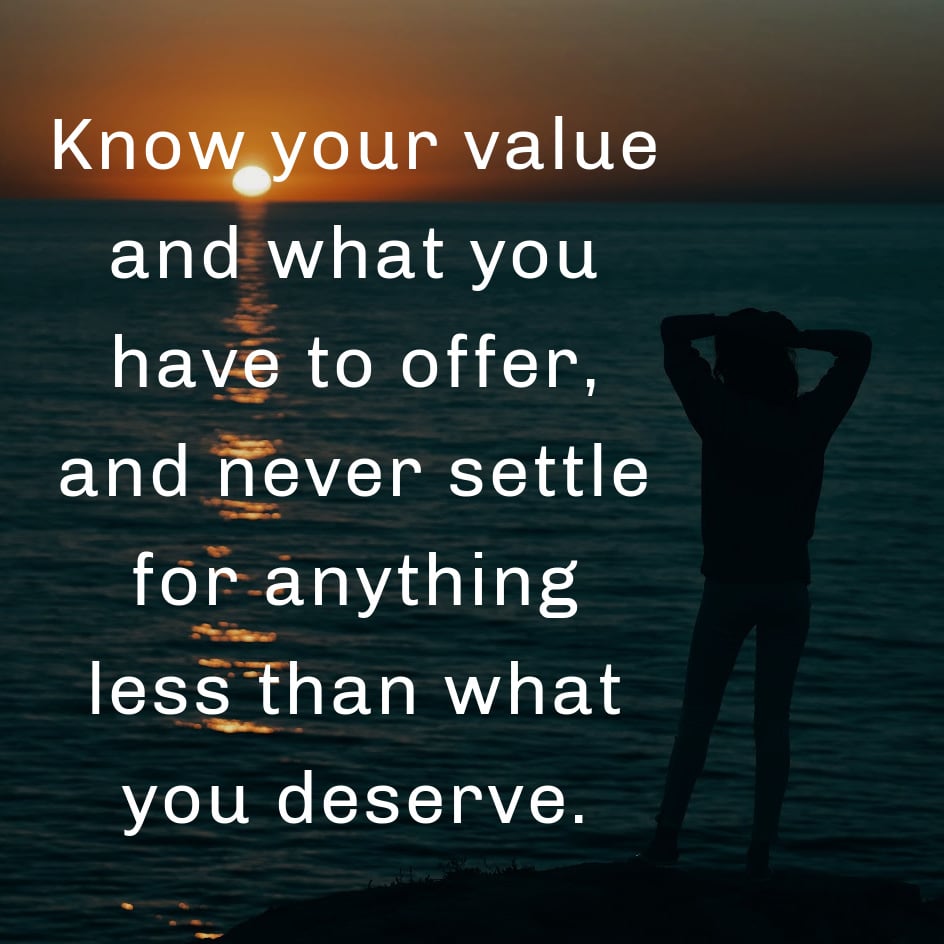 When someone treats you like you’re just one of many options, help them narrow their choice by removing yourself from the equation.

When it comes to identifying part-time people in your life, ask yourself if they treat you like you’re just one of many options. If they do, make things easier for them and take yourself out of the equation.

Now, I don’t mean that you should cut someone off just because they canceled plans on you occasionally because something else came up. If your friend Sally canceled your standing Friday night dinner plans because an old friend that she hasn’t seen in years came into town, it’s not really fair (or rational) to cut her out of your life.

On the other hand, if Sally constantly cancels plans and treats you like a “fallback” friend, then she’s not really a friend at all.  Remind yourself that you have far too much value to be someone’s “because I have nothing better to do” fake friend and remove yourself from the equation entirely. 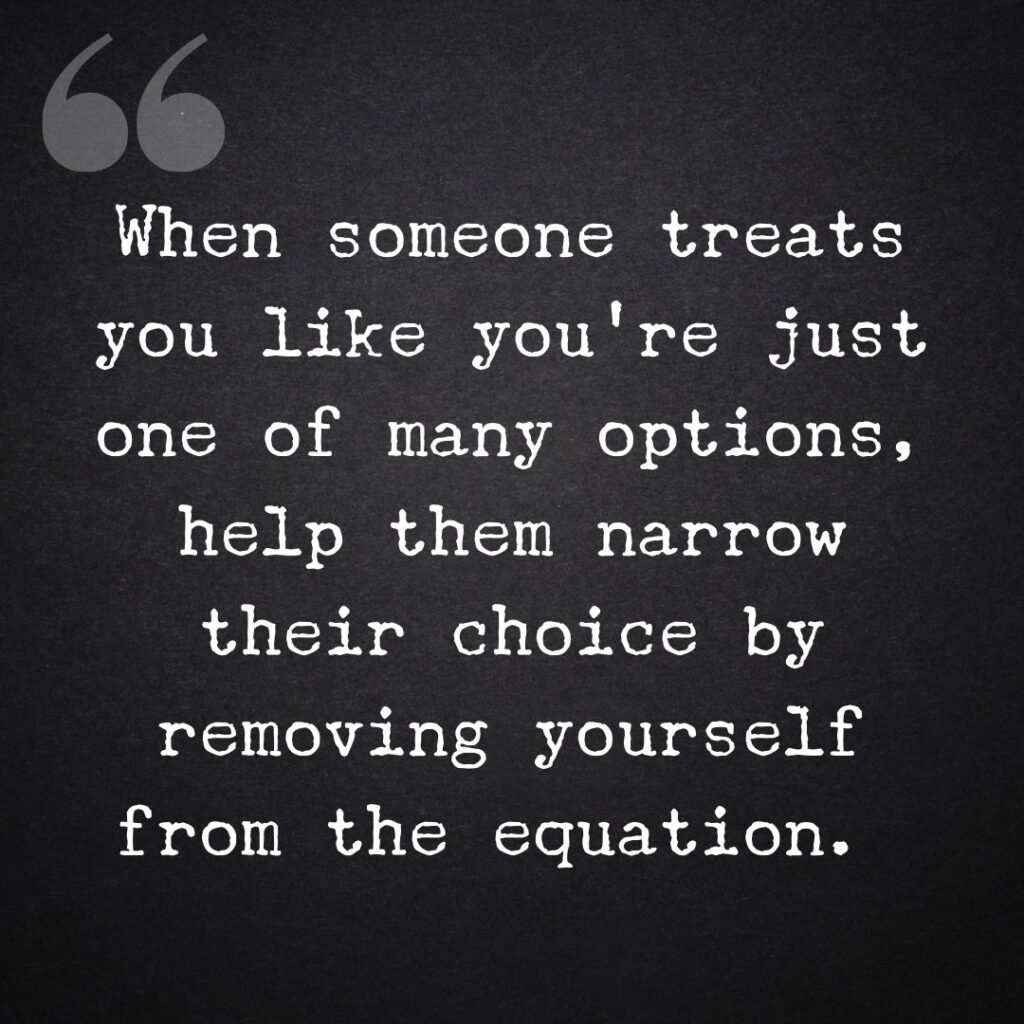 Don’t expect to see positive changes in your life if you surround yourself with negative people.

Did you know that negativity is contagious? At least that’s what researchers at the University of Chicago discovered in 2007. According to the study, “Research reveals that negative opinions cause the greatest attitude shifts, not just from good to bad, but also from bad to worse.”

In other words, not only does someone’s negativity shift your worldview from good to bad, but if you’re already in a negative state of mind it can also make you feel even worse. You know what they say, misery loves company.

On the other hand, if you surround yourself with positive and upbeat people, it stands to reason that your perspective will shift in the other direction. Not always, mind you. Sometimes when I’m in a really foul mood the last thing I want is Miss Mary Sunshine telling me to look on the bright side of life. I just want to feel my feelings in peace.

Overall, though, I try to avoid toxic people and instead surround myself with people that bring out the best in me. People who value me as much as I value them and treat me with the same respect I show them. 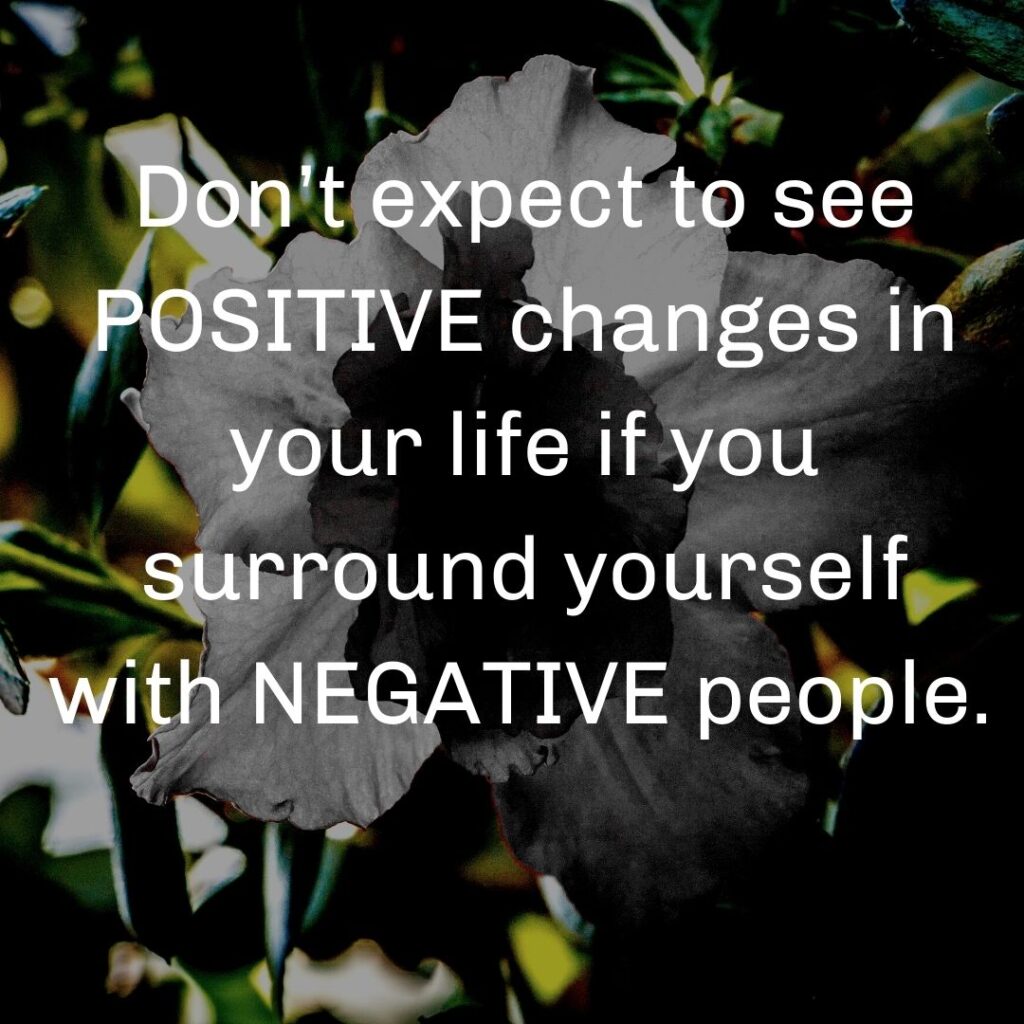 Sometimes you have to try not to care, no matter how much you do.

I think this is the hardest piece of advice in the entire quote and one that I’m not really even sure we should follow. On the one hand, I see what the author was trying to say. Caring so much for someone that cares little for you can be exhausting. More than that, it can damage your entire psyche at times.

On the other hand, though, I’d rather care too much than not at all. Empathy matters to me, and I don’t stop to ask myself if someone deserves my compassion before I give it. I’m not willing to change that part of myself because it’s a fundamental part of my core values.

Here’s what I think we should do instead. Keep caring, but don’t put all of your emotional energy into someone who constantly demonstrates that they don’t care about you. In other words, don’t make caring about them a full-time job when you’re not even a part-time concern in their life. Leave room for yourself and for those who do value you. 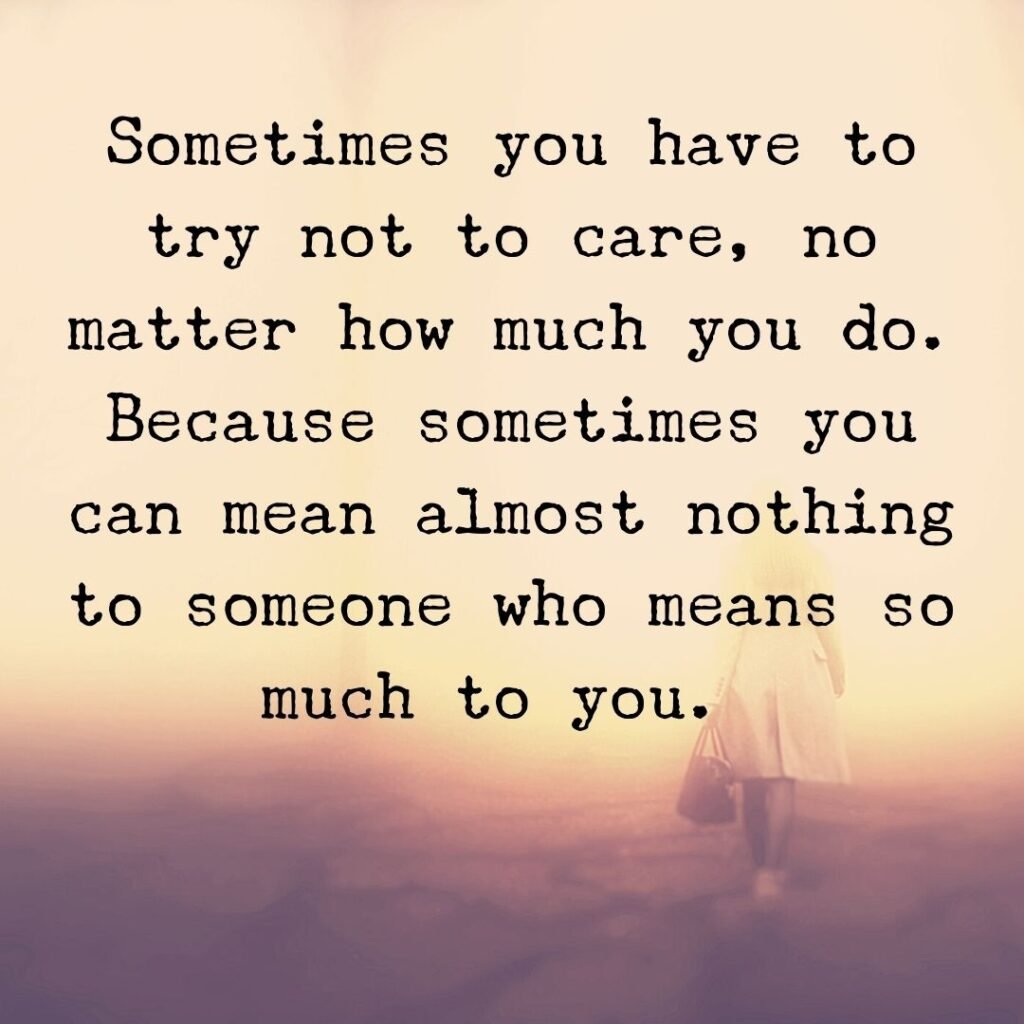 I think technically this part of the quote went along with that last bit, but I feel like it’s important enough to stand on its own for two reasons.

First, it seems like the word “pride” gets thrown around a lot in a negative way, especially when someone is trying to devalue our feelings.

For example, “Oh, you’re just being stubborn and letting your pride stand in the way of accepting my apology,” said by someone who used the words, “I’m sorry, but…” Or “you’re too proud to admit that I’m right,” said by someone who is trying to tell you that you’re overreacting to a situation. In other words, it’s used as a gaslighting tool.

Yes, sometimes pride gets the better of us…but not in this case. When you stop letting part-time people take up a full-time position in your life, you’re saying, “I respect myself too much to you continue hurting me.”

Second, sometimes it really IS about pride. You should be proud of standing up for yourself, of recognizing your value, and not letting anyone walk all over you. For people like my friend, who literally has to work very hard at doing that, it’s definitely a “prideful” moment, don’t you agree?

Let me leave you with another quote from C. Joybell C. (I bolded my favorite part):

When you stop giving part-time people a full-time position in your life, you’re opening yourself up to be loved by those who DO value you. Life is too short to spend it with people who don’t value you, don’t you think?