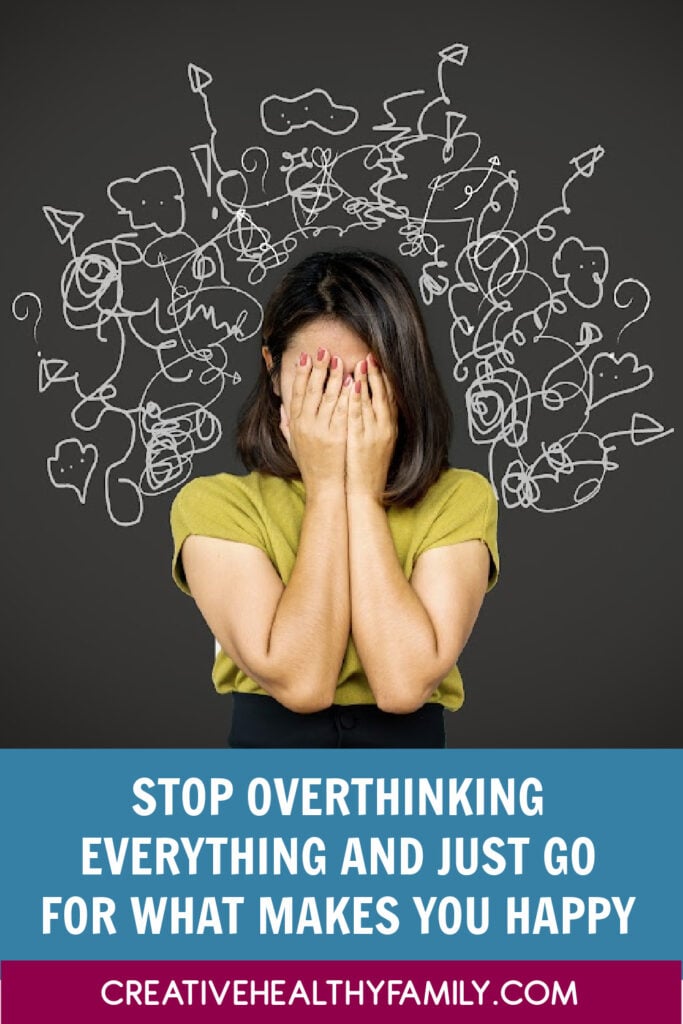 If there’s just one thing that stands in the way of our happiness, it’s overthinking. Stop letting it stand in the way. Believe in yourself and do what makes you happy! Let’s discuss. 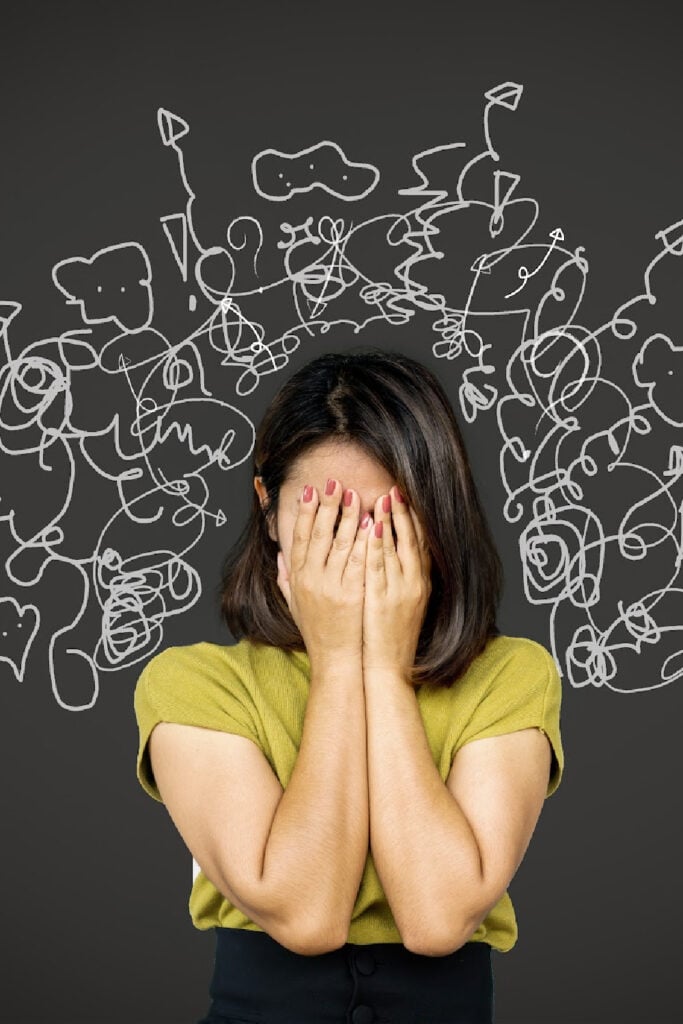 Stop Overthinking What Makes You Happy, Just Go for It

A while back, we talked about how fear can take control of our lives if we let it. While that fear can come from many sources, I’ve often found that it has one major root: overthinking. Let me explain with a little story.

Earlier this week, I was talking to a friend and fellow blogger who was feeling kind of down about her 46th birthday. She said that she felt like she hasn’t really accomplished anything that she’s always wanted to do yet.

“Like what?” I asked her. She told me that while she loves her job as a non-fiction blogger and freelancer, she always wanted to write fiction novels.  So, I asked her why she hasn’t. She replied with two words: “what if.”

“What if I start to write and the story doesn’t come?” she elaborated.  What if I finish it, no one likes it, and it’s all a waste of time that I could have spent doing something that actually works out?” The “what ifs” went on and on, spiraling into every worst-case scenario imaginable. She’s overthought it to the point that she’s afraid to even try because she’s already decided that she’ll fail.

“What if you just believe in yourself? If nothing else, at least you’ll know you tried. Besides, time spent on something you love is never time wasted,” I told her. She said she’d think about it. I said that’s the problem! 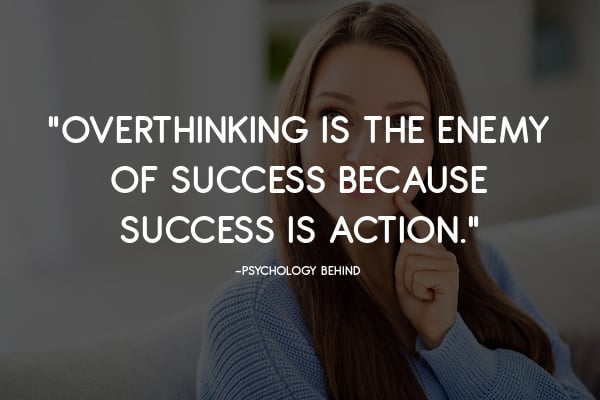 Overthinking is the enemy of success

I came across a quote on a Medium post by “Psychology Behind” recently that really says it all. It said, “Overthinking is the enemy of success because success is action.” Yes, being successful requires at least some thought. However, there’s a fine line between thinking things through and overthinking them. One helps you make a plan. The other talks you out of following through with that plan.

Even science agrees! A study by the University of California in 2013 actually found that “overthinking can be detrimental to human performance.” In 2015, the American Marketing Association also found that salespeople who just trust their gut and go with their first impressions do better than coworkers who overthink every little thing. 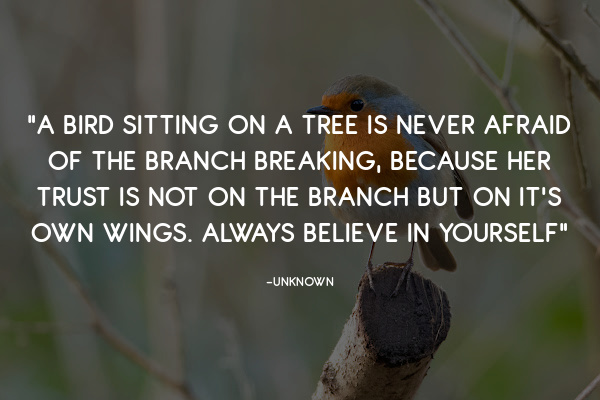 Believe in your own wings

Another beautiful quote that I absolutely love goes, “A bird sitting on a tree is never afraid of the branch breaking because her trust is not on the branch but on its own wings. Always believe in yourself” See, the bird knows- without thinking- that even if the branch breaks, she has everything she needs to survive.

Can you imagine what life would be like for her if she didn’t have faith in her wings? If she was afraid to fly? Rather than soaring through the sky, she’d spend her entire life hopping around on the ground. She’d never see what a sunset looks like from high above the treetops or know what it’s like to feel the wind in her feathers. In other words, she’d miss out on what makes being a bird so extraordinary.

When you don’t believe in yourself- when you let overthinking hold you back from what makes you happy- you’re like a bird that’s afraid to fly.  Sure, you can survive off what you find on the ground, but you’ll never reach your full potential or find true happiness. 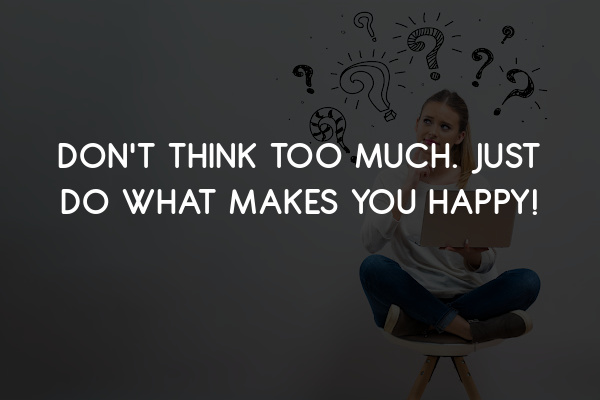 As long as you’re alive, it’s never too late to do what makes you happy

Thankfully, unlike birds who refuse to ever fly, our “wings” don’t atrophy if we don’t use them. It’s NEVER too late to believe in yourself and go for what makes you happy. The internet is full of stories about people who followed their dreams when they were older.

For example, did you know that Laura Ingalls Wilder didn’t actually write the Little House on the Prairie books until she was in her 40s? Or that Julia Child didn’t even know how to cook at all until her late 30s? Stan Lee drew his first superhero at age 43, Colonel Sanders was 62 when he opened the first KFC franchise store, and Harrison Ford was 35 when he rose to fame as Han Solo. The list of people who found success in their 30s, 40s, and even 60s goes on and on.

Doing what makes you happy isn’t just about finding fame and fortune, though. Whether you dream of becoming a world-famous novelist or just learning how to cook, as long as you’re still breathing, it’s never too late. So stop overthinking, start believing in your own wings, and just go for it!