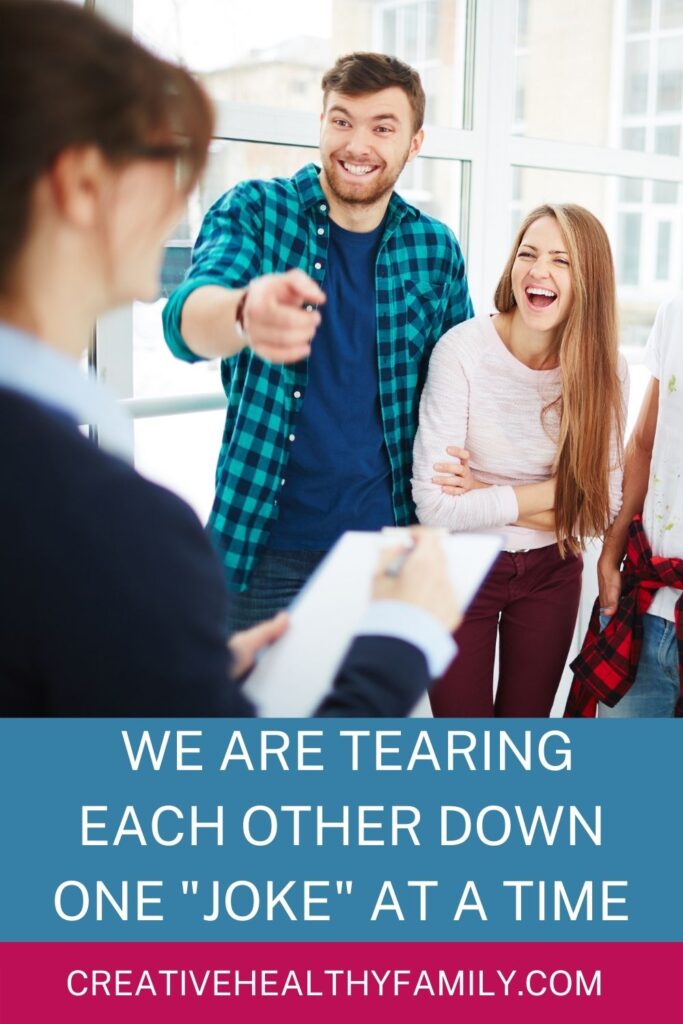 From teasing and taunting to criticisms disguised as jokes, every day in a thousand different ways, we’re tearing each other down piece by piece and calling it “all in good fun.” It’s far from funny, though. We need to do better. Let’s discuss. 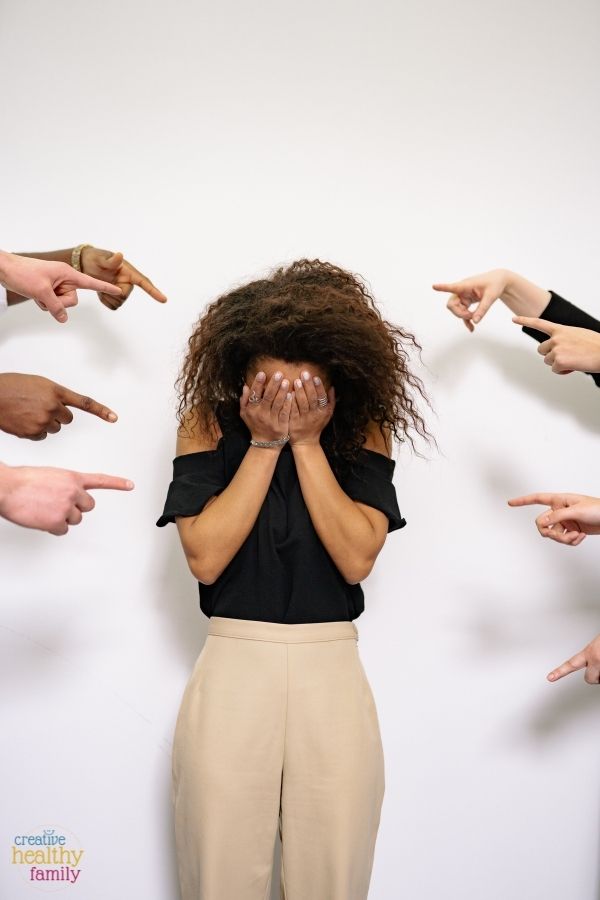 We’re Tearing Each Other Down,  One Tiny Cut at a Time

Let me get straight to the point. Words hurt. I don’t just mean obvious insults and intentional cruel words. Yes, they hurt, but they’re quick and dirty, like gut punches. We feel them immediately, and we can process them. Decide what to do about them. Decide to fight back, forgive, or forget and walk away.

No, I’m talking about the small words. The “joke” at your expense. The “just a little good-natured teasing” that you don’t find funny.  The mocking when you make a mistake. The condescending, “Just Google it” that you get in response to a genuine question.  The “you always” and “you never” absolutes. The things that may not hurt much individually, but that build up over time.

Sometimes, it’s the little things that hurt the most in the long run

Before we continue, let me just give you a few real examples of how we’re tearing each other down piece by piece without even meaning to. I’ll start with Nancy since my conversation with her yesterday actually inspired this post. Nancy accidentally knocked over a ketchup bottle while she was having breakfast with her mom. Such a small, random moment that would have been forgotten five seconds later, right?

Except, her mom turned to her, rolled her eyes, sighed, and semi-jokingly said, “You’re one of the messiest people I know.”  Nancy tried to laugh it off. After all, she’s heard from so many people over the years that she’s “too sensitive,” that she needs to “lighten up” and “learn how to take a joke.” Her mom wasn’t trying to be mean, right? She’s not a cruel person, after all. But it still hurt.

“It was such a tiny thing,” my friend said. “A tiny criticism that probably wasn’t even meant as a criticism. But that’s how it felt, and for a moment I thought, ‘It’s just one more thing that’s wrong with me.’ And just like that, I felt another piece of myself chip away.”

Then there’s my friend Trish, who quit trying to learn to cook because her husband constantly teased her about her lack of skills in the kitchen. Or Mary, who dyed her hair brown because she was tired of her family’s blonde jokes. Or how about Lola, who was late for class ONE time and now has to sit through a round of “we’re just having fun with you” jokes about her lack of punctuality EVERY day.

Each tiny cut takes a small piece of your soul

Each and every taunt, tease, and so-called “good-natured ribbing” is like a tiny cut. Just a teeny-tiny single slice of our soul. It stings at first, and then the pain is gone. So, we try to ignore it and forget about it. We do that with the next one, and the next, and the one after that.

One day, we wake up and realize that all of those tiny cuts added up to one giant piece left hanging on by a thread. All it will take is one more slice and we’ll lose a big part of who we are forever. It truly is death by a thousand cuts.

Bottom line, if you’re the only one laughing, you’re not just being funny. You’re being mean. You’re playing a part in tearing someone down. You’re taking a tiny piece of them that they can never get back. 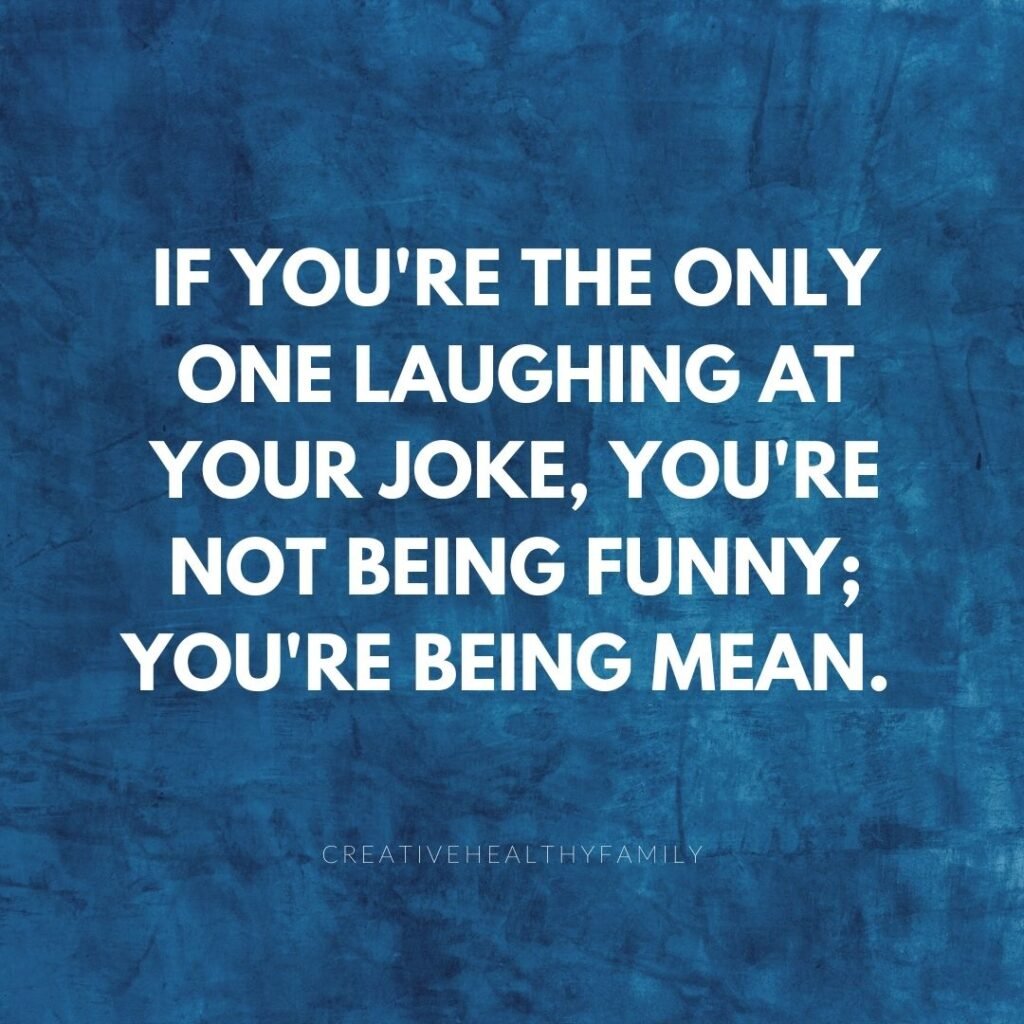 If you want to change, there’s one easy solution

The silver lining to all of this is that if we don’t genuinely want to hurt someone, there’s hope for us. Even better, there’s a single very easy solution! Just think before you speak and act. Seriously, that’s the ONLY thing we need to do to be better people. THINK first.

Before you “joke” with someone, before you let loose with that “good-natured ribbing,” think about how you’d feel if someone said something similar to you. If you know that you’ll need to say the words, “I’m just kidding with you” after your so-called joke, stop right there. Just don’t say it.

If, despite your best efforts to think before you speak, you still say something that causes another person pain, apologize. Don’t get defensive. Don’t use passive apologies like, “I’m sorry you’re feelings are hurt,” either, because that’s basically putting the blame back on them. Instead, try something like, “I’m very sorry that I caused you pain. I am trying to be more conscientious, and clearly, I still have a ways to go.”

That’s it. Think before you speak and apologize like you mean it. Those two things can go a long way towards healing that tiny cut before it festers into something bigger.

If you’re letting others tear people down, you’re still part of the problem

One last thing. At this point, maybe you’re thinking, “I’ve never told someone that they’re being too sensitive. I’ve never joked at someone else’s expense. I’m a genuinely nice person. So, surely, she can’t be talking about me!”

The thing is, even the nicest people in the world play a part in tearing others down. We do it when we stand by and let others joke at another person’s expense. When we laugh because we don’t want the “joker” to turn their teasing on us. When we tell ourselves, “Look, they’re laughing, too, so it’s fine,” even though we can see the hint of pain flicker through the victim’s eyes.

We stand by, we scroll on by, we ignore. We tell ourselves it’s not our place to say anything. Not our responsibility to “coddle” each other. That we’re not doing anyone any favors by stepping in. That they need to learn to stand up for themselves. That if it really bothered them, they’d say something.

I get it. We don’t want to get involved. We’re fighting our own battles; we don’t have the energy to fight someone else’s. We’re trying to avoid unnecessary drama in our lives. We just want to live and let live.

However, just like how you treat people says everything about you, so does how you let others treat people. If you stand by and watch one person cut another, you’re saying that it’s acceptable. You might as well be laughing right along with them.

We need to do better. We need to stop tearing each other down piece by piece and start trying to build each other back up. I think that we’re really trying with the big stuff. We recognize that we’ve been less than kind to each other and we’re working on remedying it. But we also need to recognize that tiny cuts hurt just as much.