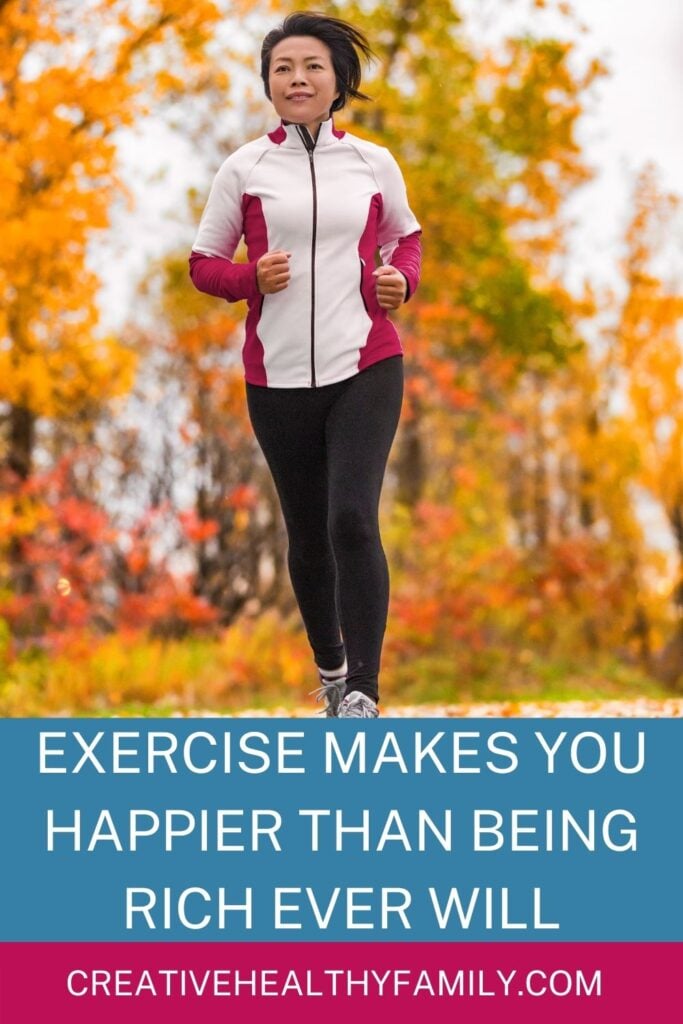 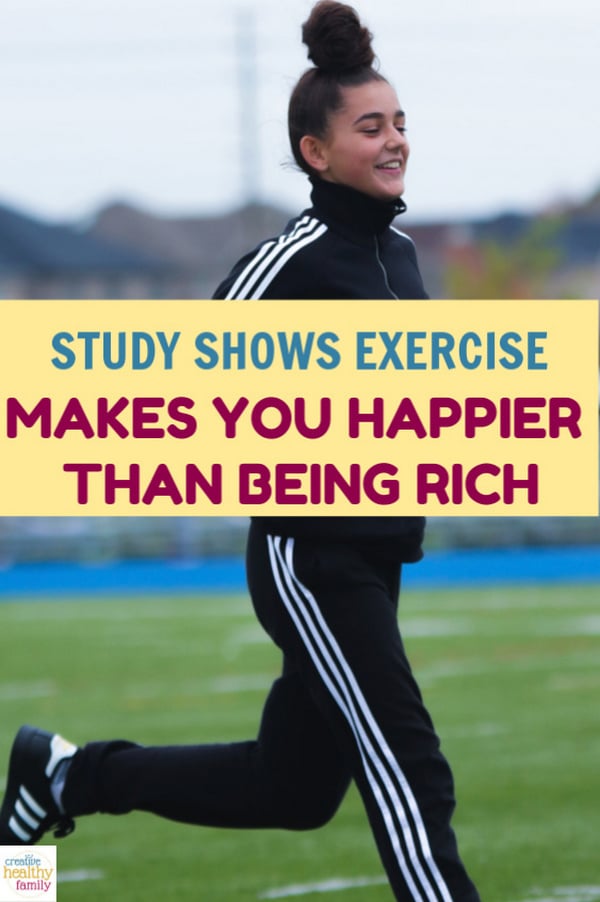 If “make lots of money” ranks higher on your list of goals this year than “get fit,” you may want to readjust your priorities. According to a fascinating study, exercise makes you happier than being rich! Keep reading to discover why fitness is better for your mental health than money.

Exercise Makes You Happier Than Being Rich Ever Will, According to Study

We already know that a good workout boosts our “feel good” endorphins and helps relieve stress. Can it really make us feel better than money, though? According to researchers at Oxford and Yale, it can! Using the CDC’s Prevention Behavioral Risk Factors Surveillance System survey results from three different years, researchers analyzed data from over 1.2 million adult Americans to determine whether exercise really had a major positive impact on mental health. Spoiler alert- it did.

In their own words, “We compared the number of days of bad self-reported mental health between individuals who exercised and those who did not….” They go on to explain that the parameters used in super boring “study-ese.” Long story short, they looked at people from all walks of life. All races, genders, income levels, education levels, and so on.

What did they find?

Again, in layperson’s terms, they discovered that people from all income levels who exercised reported up to 43% fewer bad mental health days than those who didn’t. While all types of exercise helped improve mental health, those who spent 45 mins working out 3-5 times a week saw more benefits than those who just spent a day or two exercising. Also, people who engaged in social physical activities- like team sports– saw the greatest benefit of all.

What does this have to do with money?

Right about now, you’re probably thinking that I haven’t told you anything new. As I said, we already know that exercise is good for our mental health! Here’s where it gets interesting, though. Researchers found that people who were physically active reported the same levels of happiness as those who made up to around $25K more than them.

More Things That Make You Happier Than Being Rich Ever Will

Exercise isn’t the only thing that’s better than just being rich. Here are a few more things to prioritize higher than “make lots of money” when you’re making a list of things that will bring you joy in life.

Loving others and being loved

If there’s one thing in this world that will make you infinitely happier than money, it’s love. I don’t just mean that in the trite “love is all you need” sense, either. The act of loving and being loved released oxytocin, a feel-good hormone. Not only does that hormone bring us more joy in life, but a 2020 study also found that it could actually be a key to treating cognitive disorders like Alzheimer’s and dementia.

Whether it’s a good relationship with your spouse, your parents, your kids, siblings, or even just your friends, connecting with others makes us far happier than money ever could. In fact, when researchers study happiness around the world, they consistently find that nations that put a strong focus on relationships report greater joy overall than those that focus more on money.

For example, the findings of Belinda Campos, a professor at the University of California, Berkeley, “show that sociocultural contexts that emphasize prioritizing others before the self (e.g., Latino and East Asian) can be beneficial for relationships and protective of health. These findings highlight the benefits of relationship patterns that have been understudied and/or regarded as “deficits” in a U.S. culture that prioritizes the self more than ever before.”

More free time to spend with the people who matter

The key to happiness isn’t more money, it’s more time, according to a 2019 Harvard survey. Out of the 100,000 working adults that participated, those who said that they would rather have more free time than make more money had “more fulfilling social relationships, more satisfying careers, and more joy” overall.

If there’s one thing we never have enough of, it’s time with the people we love. Life goes by so fast, so we need to make the most of the time we have. Besides, what’s the point of spending every waking moment working to make more money if you never have any time left over to actually enjoy it?

Helping others in need

Booker T. Washington once said, “Those who are happiest are those who do the most for others.” Turns out that even science agrees. A 2013 study done by the American Psychological Association found that giving makes people feel better than getting. The interesting thing is that this research applies universally to both wealthy and impoverished nations.

While we shouldn’t help others in need just to make ourselves feel good, it’s definitely a wonderful benefit to giving back, don’t you think? So, rather than focusing on being wealthy, spend more time trying to be the reason someone believes in good people. 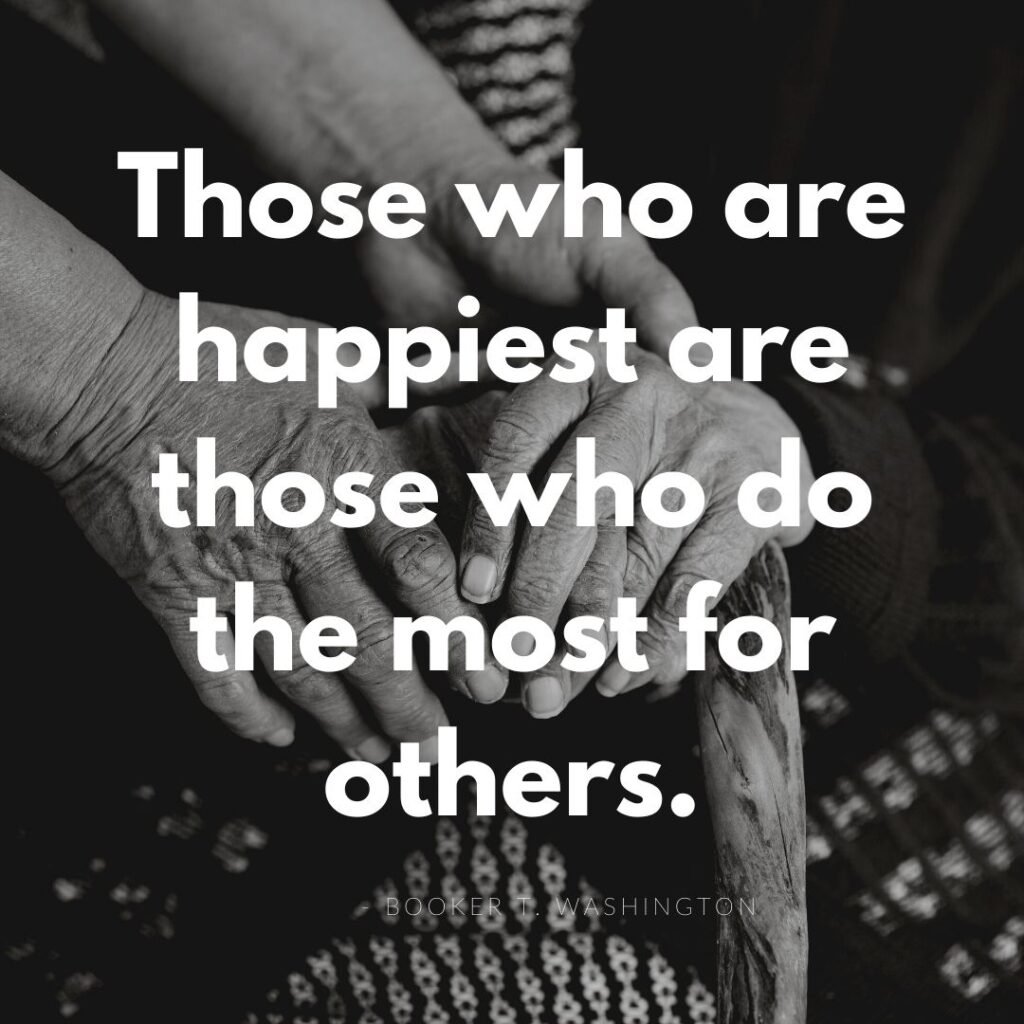 If we want to really understand how exercise makes you happier than being rich, we have to look at another study. This one took place back in 2015 and tried to answer the question, “Can money buy happiness?” Turns out, it can, but only if you spend it by doing rather than having. In other words, it’s not about how much money you have; it’s about how you use it.

The study also looked at what makes wealthy people report a perfect level of “10” on the happiness scale. Their answer? More money. “Wealthy individuals–whether worth $1 million or $10 million–are not happier as their wealth increases,” says Michael Norton, lead researcher.  “The research shows that current happiness is not related to wealth and may even be negatively related to income.”

If you still need a bit more convincing, consider this; there are countless studies showing that exercise boosts your mood. When it comes to money, though, most studies show the complete opposite. More money rarely equals more happiness.

What if money worries are behind those bad days?

Let’s address the very real flaws with these studies; they don’t seem to consider the people who are struggling to make ends meet. If you’re spending more days than not crying because you don’t know how you’ll keep a roof over your family’s head, a good workout isn’t going to fix it. Jogging doesn’t pay the bills and yoga won’t keep your lights turned on.

Keep in mind, however, that these studies show that exercise makes you happier than being rich. There is a huge difference between having enough to make ends meet and being wealthy. In no world is anyone saying that riding a bike will take away the pain of knowing that you have to choose between heating your home and feeding your children. That said, countless studies, including this one from 2014, show that a good workout helps protect your brain from stress-induced depression, like that caused by worrying about money. So, while that bike ride won’t eliminate the cause of your stress, it can give you a much-needed break from worrying.

Long story short, exercise alone won’t make you happy if you’re dealing with extreme money worries. However, if you’re in a position where you can comfortably pay your bills, regular workouts will help you find your bliss far faster than regular raises. So go ahead and readjust your goals to put “get fit” above “make lots of money.” You’ll be a lot happier if you do!